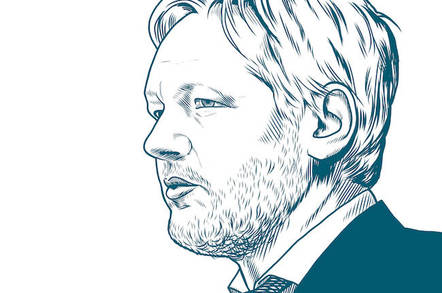 Housemate from hell Julian Assange is taking his landlord, the government of Ecuador, to court to stop its officials from, allegedly, running roughshod over his human rights.

The WikiLeaks supremo is fed up with being essentially held in near-solitary confinement in an Ecuadorian embassy broom cupboard in London, England.

In 2012, Assange was granted political asylum by Ecuador and was allowed to stay in its embassy in the UK capital to avoid extradition to Sweden, which at the time was investigating allegations of sexual assault against him. The Australian was cuffed and bailed in the UK in 2010, after the Swedes got a European arrest warrant for him, and while facing deportation to Sweden, he legged it to the embassy.

Assange feared if he was transferred to Sweden, he would shortly be vanished into thin air by the CIA for publishing, among other material, 700,000-plus secret American diplomatic cables – which were slipped to WikiLeaks by US Army intelligence analyst Chelsea Manning. Thus, he ducked into Ecuador's Knightsbridge pad.

Sweden's prosecutors have since dropped their probe against Assange, although if he steps foot outside the flat, Brit cops will nab him for breaching his bail conditions – he wasn't cleared to live in the embassy, and was supposed to be staying with friends in the countryside. And, again, he fears if he's collared, he'll be on the next plane to a CIA black site.

Fast forward to 2018, and Assange is still in the embassy. At first, things were OK, given the circumstance. However, after a few fallings out, some scuffles and broken furniture, and trouble stirred up between Ecuador and the United Kingdom, embassy officials cut off his internet access, installed signal jammers to stop him using his cellphone, and placed restrictions on visitors.

Then, DEF CON 1: like something out of a college-set sitcom, Assange was told if he wanted his internet access back, he had to clean the bathroom, and take better care of his poor cat. Now, this means war.

St Jules wants to overturn the so-called "Special Protocol," the rules he must follow in order to maintain his political asylum. WikiLeaks lawyer Baltasar Garzon is in Ecuador right now to secure a court hearing this week to tear up the protocol – a protocol admittedly put in place by a nation state that's protected him for years.

So what are the rules? Well, they allow the South American nation's government to censor his speech, banning him from saying anything politically awkward. Also, any visitors – journalists, lawyers, former Playboy models, or anyone else dying to hear Julian's fabulous wit and charm in person – must hand over their online usernames, device serial numbers, and other private details, which may be shared with other government agencies. Also, belongings and equipment can be seized from Assange and his visiting chums at any time, without warning nor warrant, and given to the British.

In a statement on Friday, Wikileaks claimed:

The protocol makes Assange's political asylum contingent on censoring his freedom of opinion, speech and association. The protocol also requires journalists, his lawyers and anyone else seeking to see Julian Assange to disclose private or political details such as their social media usernames, the serial numbers and IMEI codes of their phones and tablets with Ecuador--which the Protocol says the government may "share with other agencies". The Protocol claims the Embassy may seize the property of Mr. Assange or his visitors, and, without a warrant, hand it over to UK authorities.

Assange is also pretty cheesed off that Human Rights Watch General Counsel Dinah PoKempner was apparently stopped by Ecuador from visiting him, and meetings with his lawyers and journalists were blocked, too. PoKempner likened the cyber-bad-boy's six-year sojourn in London to "solitary confinement."

The pressure is on Ecuador to give up their roomie to the Americans, especially after Wikileaks published top-secret CIA documents, dubbed Vault 7. Now, Assange fears the new president of Ecuador, Lenín Moreno, has ordered staff to psychologically break him after US Vice President Iron Mike Pence visited the country in June. ®