Zuck and Clegg in Silicon Valley – no, it's not the latest Netflix satire 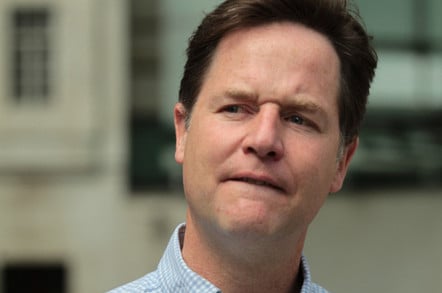 The Financial Times reported that the ex-Liberal Democrat leader will move to Silicon Valley permanently in January to replace Elliot Schrage, who announced his departure in June.

The move appears to mark something of a change of heart for the knight of the realm, who in 2016 said that he was "not especially bedazzled by Facebook" and found the "messianic Californian new-worldy-touchy-feely culture of the Social Network™ a little grating".

Perhaps that's why Zuck had to give him the hard sell – according to the FT, the Facebook boss "wooed" Clegg to join the multi-billion-dollar biz with the promise he would have a leading role in shaping the company’s strategy.

Whether this will come to anything remains to be seen. But presumably Clegg will be more circumspect about the promises he makes before starting the new role than he was in 2010, when he pledged not to raise tuition fees, then promptly entered a coalition that did just that.

Clegg lost his seat in his student-heavy constituency of Sheffield Hallam in the 2017 UK general election, having held it since 2005 when he succeeded fellow Lib Dem Richard Allan – who also happens to work at Facebook, as director of policy in Europe.

Cambridge university grad Clegg will join Facebook at a time when it is under increasing pressure from regulators and governments around the world over everything from taxes to data protection.

Clegg is the most senior European politician to take up a role in Silicon Valley, and his appointment is an attempt by Facebook to demonstrate that it isn't trapped in its own tech bubble and is taking criticism from politicians seriously.

The platform will also be hoping to rely on Clegg’s political past and experience as a European trade negotiator to help it navigate future run-ins with Eurocrats. Certainly, he should be well versed in how to deflect questions from British MPs if ever called to give evidence in front of committees.

And Clegg has already had some practice in speaking up for the poor put-upon billionaire he’s going to be working for, having written an op-ed in the Independent last year titled “In defence of Facebook and the Silicon Valley tech giants”.

In it, the former Liberal Democrat leader rounds on those who “vilify social media companies for scooping up the lion’s share of advertising revenue” and scoffs at the idea Zuck et al are a threat to humankind.

“It’s time we pause for breath before everyone charges off in a stampede of condemnation of tax-dodging-fake-news-extremism-promoting-data-controlling tech firms. The unthinking mood of hostility could soon topple into outright Luddism against new forms of technology.”

Clegg’s party has historically stood against increased surveillance, having spoken out against the UK’s Snooper’s Charter and called for a Digital Bill of Rights to protect online civil liberties and “help keep the internet open”.

Quite how this approach tallies with Facebook’s data-hungry, user-stalking, ad-fulled business model isn't clear – but Clegg did reserve some space in the Indy article for a complaint about the “jiggery-pokery of tax planning by large multinational tech companies”. OK. ®