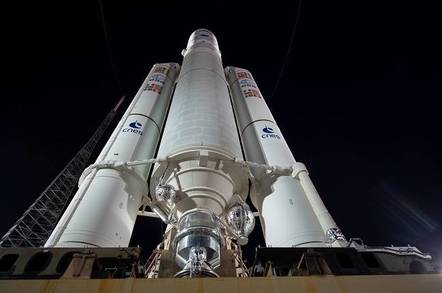 BepiColombo, the first mission to Mercury for the European Space Agency (ESA), is due to lift off tomorrow morning at 0145 UTC on an Ariane 5 rocket.

The spacecraft is named after Professor Guiseppe (Bepi) Colombo, who suggested to NASA that it might swing its Mariner 10 probe by Venus in order to visit Mercury in 1974 and 1975.

It is actually the third mission to the innermost planet, following Mariner 10, which came within 327km of the surface in 1975, and MESSENGER, which was placed in an elliptical orbit around the planet, coming as close as 200km before heading out to 15,000km. It would eventually come a whole lot closer when it impacted Mercury on 30 April 2015 after its propellant finally ran out.

ESA does not expect BepiColombo to spend quite as long in orbit as its predecessor, with a nominal mission of just over a year following a seven-year journey to the planet. If things go well, plans are afoot to extend the mission by a further year.

And goodness, it is a complicated mission. The spacecraft has four parts: a propulsion unit, a sun-shield and two probes to do the science, one from ESA and one from the Japanese space agency, JAXA.

Getting there is half the fun

The Mercury Transfer Module (MTM), built by ESA, will use a solar electric propulsion system coupled with a gravity assist from an Earth flyby, two more from Venus and six from Mercury to finally drop into orbit around the innermost planet on 5 December 2025.

Scientists will fire up the payload every six months or so to check things are in tip-top condition before the spacecraft arrives at Mercury. After firing the electric propulsion for one final time, approximately two months before the first orbit insertion manoeuvre, the MTM will be dumped, and the rest of the spacecraft will enter Mercury’s sphere of influence.

At this point, the spacecraft will consist of ESA’s Mercury Planetary Orbiter (MPO), JAXA’s Mercury Magnetospheric Orbiter (MMO) and the MMO Sunshield and Interface Structure (MOSIF). The MMO is released first, in a 590 x 11,640km orbit. The MPO will then perform two more manoeuvres and eject the MOSIF before heading lower to its own 480 x 1,500km orbit.

The primary goal of the mission is obviously to take a very close look at Mercury, building on what has been learned in earlier missions. The probes will determine the evolution of the planet, study its geology, atmosphere and magnetosphere. It will also investigate Mercury’s polar deposits and the origin of the planet’s magnetic field. A test of Einstein’s theory of general relativity is also planned.

Getting the numbers right

The launch is the fourth Ariane 5 from ESA’s spaceport in French Guiana since the incident in January that left a payload in the wrong orbit due to a programming error. The Ariane 5 has otherwise been a pretty reliable booster, notching up five failures over its 100 launches, of which two resulted in the destruction of the rocket. The ECA variant, on which BepiColombo will fly, has only suffered disassembly-by-explosion once, on its maiden flight back in 2002.

The mission had originally been planned to launch atop a Russian Soyuz 2-1B/Fregat-M launch vehicle, but as the weight of the spacecraft increased, scientists had to rethink their plans.

By the time BepiColombo performs its first flyby of Mercury, nearly three years after launch, on 2 October 2021, ESA is hoping to be winding down the Ariane 5 programme in favour of the cheaper Ariane 6. Even more optimistically, NASA expects to have launched its James Webb Space Telescope in March of that year, on what could well be one of the last Ariane 5 launches. ®