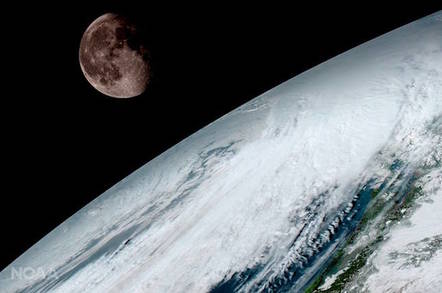 Video A Chinese businessman has announced plans to light Chengdu at night by launching an artificial "moon" to direct the out-of-sight Sun's rays down onto the city's streets.

The idea is the brainchild of Wu Chunfeng, chairman of Chengdu Aerospace Science and Technology Microelectronics System Research Institute. He said preliminary testing is now complete, and the satellite should be ready for launch by 2020, according to state media this week.

The plan won't bring perpetual daytime to the city. Instead, the satellite will shine about eight times brighter than our natural satellite. However, Wu is convinced it'll be enough to save the city a fortune in electricity bills for street lighting.

Controls on the satellite will allow light levels to be configured and controlled, Wu told a conference of entrepreneurs, and the final object would be able to reflect light on a 10 to 80 mile area, well within the city's area.

Concerns were expressed that having no proper night might affect animal life around the city. However, Kang Weimin, director of the Institute of Optics in the School of Aerospace at Harbin Institute of Technology in China, said the light levels shouldn't be enough to change the behavior of fauna.

The lunar-tic idea appears to have been borrowed from a similar system set up by the Norwegian town of Rjukan, which gets little sunlight during the winter months due to being nestled in a valley. In 2013, the town set up three computer-controlled mirrors to shine sunlight into the main square; you can see it in action below.

But that was on land. Doing it from orbit is another kettle of fish completely. The costs of getting enough material into orbit to construct the artificial moon would be prohibitively expensive with little or no return. File this one in the unlikely-to-happen drawer. ®