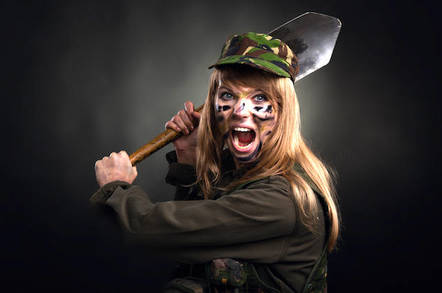 The UK Ministry of Defence could terminate Capita's disastrous military IT contract following confirmation that the Recruiting Partnering Project (RPP) was 90 per cent below recruiting targets for calendar Q1.

The Army is gradually disappearing before your eyes and it's doing so on your watch and you, forgive me, have got to do something about it. How much worse does this have to get, how many more thousands do you have to be short, how much more does the Army have to shrink before you, to use an Army phrase, take your digit out, and do something about it?

Williamson replied: "If Capita isn't the right partner to go forward on this I have no qualms in making that decision and bringing that in house."

The RPP's core IT systems went live in November 2017 after years of backroom wrangling and delays. The notorious outsourcer's contract with the MoD (also known as DRS in military circles) was first signed in 2012, with MPs publicly wondering whether to cancel the deal within just two years.

Sources have previously described to The Register how the shambolic system kneecapped military recruiters' ability to process applicants.

Despite the £1.3bn deal supposedly driving greater efficiency in military recruiting through new custom-built IT systems and outsourcing of military jobs to the private sector, the Army was below its target strength by more than 5,000 people, MPs were told yesterday.

MPs have long been calling for Capita to be stripped of the contract. Four years ago the cost of terminating the contract was given as £50m.

A Capita spokeswoman told us: "Capita and the British Army have reset this strategic partnership, with a renewed focus on delivering a joint campaign to improve the number and quality of applicants to the British Army. Without affecting the high standards the British Army maintains, we have identified measures to remove barriers for joining to ensure we are not unnecessarily rejecting candidates.

"Regular soldier applications to join the British Army are at a five-year high and the number of overall eligible applications have increased by 71 per cent between the same period from 2013 to 2018. Since 2012, we have reduced the length of time it takes for regular soldiers to join the Army by 81 days. We are confident that the improvements and changes we are introducing to the Army recruitment process are delivering a faster service and better outcomes for candidates and the Army."

The Sun reported that out of 100,000 people wanting to join the Army in 2017, just 7,500 made it into uniform. While military recruiting necessarily weeds out a large number of people who are not suitable for Army life, a success rate of 7.5 per cent is nothing for Capita and its IT systems to cheer about. ®