Good news: Largest, most ancient known galaxy supercluster is spotted. Bad news: It's collapsing on itself 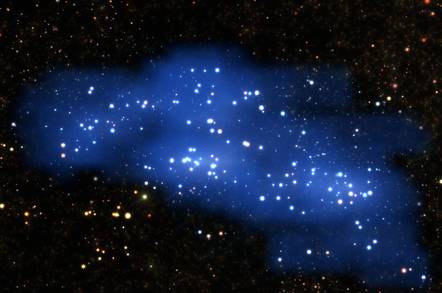 Behold – Hyperion (according to an artist)

An international team of astronomers have stumbled upon the largest and oldest galaxy supercluster found to date, measuring more than four quadrillion solar masses.

The formation, dubbed Hyperion, is a giant complex blob of several filaments of galaxies and dark matter. It is thought to have come into being about two billion years after the Big Bang.

“Structures as large and complex as Hyperion had never been discovered at such distances, it wasn't clear that the universe was capable of making structures like this so early on in its history,” Brian Lemaux, a postdoctoral researcher at University of California, Davis, who helped discover Hyperion, told The Register today. "Since gravity has only had a short time to act at these distances, the universe being a little older than two billion years at the distance of Hyperion, seeing a structure of this kind with all its complexity was very surprising."

Superclusters of galaxies have been discovered closer to Earth. These are normally more well structured with clear concentrations of mass, whereas Hyperion is more uniformly distributed.

The ancient titan is estimated to be a whopping 4.8 quadrillion times the mass of our Sun (4.8 × 1015 solar masses) and is collapsing or beginning to collapse under gravity, according to a research paper to be published in the Astronomy & Astrophysics journal.

Hyperion, billions of light years away, is likely to resemble structures like the Sloan Great Wall, a giant formation of galaxies located one billion light years away or the Virgo Supercluster, a clump that contains the Milky Way.

The ancient cluster was discovered using the VIMOS instrument on the European Southern Observatory’s (ESO) Very Large Telescope in Chile. VIMOS stands for VIsible Multi-Object Spectrograph and the tool takes images of a region of a sky to map out stars. Incoming light is examined with a spectrograph to work out how the galaxies formed and evolved over time.

The team of boffins who clocked the supercluster, we're told, is led by Olga Cucciati of the Istituto Nazionale di Astrofisica in Bologna, Italy, along with Lemaux, and the group includes Lori Lubin, a professor of physics also at UC Davis in the US.

The scientists aren’t sure how protoclusters like Hyperion began to take shape. Lemaux told El Reg that the topic is still an active debate in the astrophysics community.

“As a kind of general principle, the very early universe, while being mostly smooth in its density distribution, had small fluctuations of about one part in 100,000. Over time, these small density contrasts gave birth, mostly through the work of gravity and the expansion energy of the universe known as dark energy, to the cosmic web that we observe today comprised of connected filaments of matter cutting through large voids," he explained.

The discovery of Hyperion is particularly useful as it allows scientists to study a giant supercluster still in its early stages of life, he concluded. ®

So, does my stellar nursery look big in this?

It's all gone potato-shaped for some galaxies already