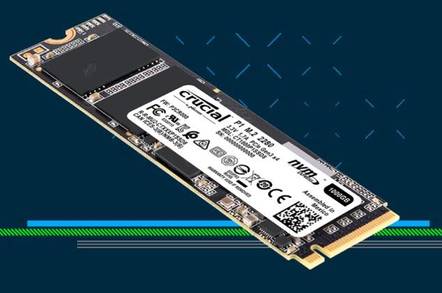 The P1 comes in 500GB, 1TB (single-sided) and 2TB (dual-sided) capacities, like the 660p, and has the same M.2 form factor. It uses an SLC (1 bit/cell) write cache to overcome the slowness of QLC flash, and has a five-year warranty.

Crucial has pitched the SSD as a disk drive replacement and it comes with Acronis TrueImage copying software. In effect it's an update on Crucial's MX500 drive, which targeted the same market.

This came in 2.5-inch and M.2 formats with similar capacities but a 6Gbit/s SATA interface. It used 64-layer TLC (3bits/cell) NAND and the M.2 version was limited to 1TB maximum capacity.

The P1's performance numbers look a bit sexier than those for Intel's 660p:

These are "up to" numbers and performance slows as capacities reduce from 2TB through 1TB to 500GB.

On paper, the P1 should blow away the MX500. However, Tom's Hardware found it not much faster at all with real-world application. It suggested a firmware fix might be needed to remedy this.

In terms of endurance, the P1 features a 1.5 million-hour MTTF (mean time to failure) rating. The TB written (TBW) during its five-year warrantied life are 100TBW for the 500GB model, 200TBW on the 1TB and 400TBW on the 2TB version.