Samsung-screened mobe not easily repaired, just like a Samsung 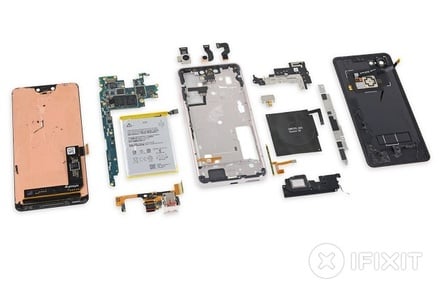 The Pixel 3 and its oversized sibling, the 3 XL, made an appearance last week after so many leaks that its IP68 rating could have been put in jeopardy.

iFixit chose the Pixel 3 XL as its victim. After taking a heat gun and suction cups to it, the team were able to extract the oh-so-fragile glass back from the display assembly and peer through the copious amounts of glue into the guts of the thing.

First out came the 13.2Wh battery, also glued into place, replete with a hidden ribbon cable beneath it to trap the unwary (including the iFixit tinkerers, who snapped it). It's a shade under last year's Pixel 2 XL's 13.6Wh but compares favourably to the 12.08Wh of the iPhone XS Max.

The breakages continued as the team dug further, splitting the speaker housing and plowing through yet more waterproofing adhesive to get to the chippery within.

Once inside, and having scraped off large amounts of thermal paste, the Pixel 3 XL is very much a Qualcomm party. The San Diego-based outfit provides silicon for audio, power management and communication as well as the all-important Snapdragon 845 processor. Google has layered 4GB of Micron DRAM over the Snapdragon chip.

The Pixel 3 XL the iFixit team had a crack at was the 64GB incarnation, with the SK Hynix flash chip mounted next to a carry-over from the Pixel 2 XL – Google's SR3HX Pixel Visual Core.

After extracting the slightly beefed-up camera, the team, armed again with their trusty heat gun, dismantled the display to discover that the 6.3" 1440x2960 display is indeed a Samsung AMOLED unit replete with a Samsung touch controller.

The similarities with the Galaxy S9+ don't end with the chip, as the iFixit team scored Google's latest, greatest and biggest a not so great 4 out of 10 for repairability (the same as the S9+ and down on the iPhone XS Max). The glass back panel has rightly comes in for some stick – it looks great but is obviously fragile. Gallons of glue add to repair challenges and getting at the display needs the phone to be completely taken apart.

So look after those screens, kids. ®