Two weeks after he went public with illness, philanthropist Alt-F4s from this simulation we call reality 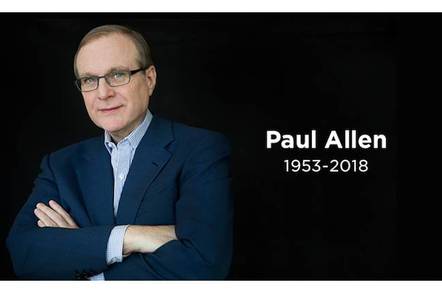 Obit Billionaire Paul Allen, who cofounded Microsoft with Bill Gates in 1975 and is credited with coining the company's name, has died of cancer aged 65.

The announcement was made by Vulcan Inc, the vehicle that managed Allen's billions, on behalf of his family and the Paul Allen Network.

The organization said he died, “Monday afternoon, October 15, 2018, from complications of non-Hodgkin’s lymphoma in Seattle.” Just two weeks ago, he revealed the return of the cancer, and said: “I plan on fighting this aggressively.” It was his third bout of the cancer, and developments in medicine since his last battle with the disease in 2009 meant, he wrote, “my doctors are optimistic that I will see good results from the latest therapies, as am I.”

Allen's biggest contribution to early Microsoft was deal-making rather than code. With Gates responsible for most of Microsoft's programming work, it was Allen who cut a deal to provide a disk operating system (DOS) for IBM's PC. He turned to code Tim Paterson wrote for Seattle Computer Products, paying a total of $75,000 for a clone of the CP/M operating system called QDOS that was later renamed to 86-DOS. Microsoft eventually hired Paterson, renamed the software to MS-DOS (not MD-DOS, New York Times), delivered it to IBM to ship as PC-DOS with its fledgling 4.77MHz Intel 8088 PCs. The rest is history.

A successful treatment for non-Hodgkin's lymphoma led to Allen resigning from Microsoft in 1983, although at that time he retained his seat on the Microsoft board, eventually winding up as vice-chairman. He retained his shares, which made him – with cofounder Bill Gates – a billionaire when Microsoft went public in 1986. His departure from day-to-day activities at Microsoft wasn't without some rancor: Gates had tried to buy Allen's shares at a low price in 1983.

Microsoft's post-Gates CEO Satya Nadella has been gracious, with this statement tweeted this afternoon:

Statement from Microsoft CEO Satya Nadella on the passing of Paul Allen: pic.twitter.com/1iLDLenLKz

In 2010, Allen followed Gates and Warren Buffet in making the “Giving Pledge”, a promise to give away most of his estimated US$20bn wealth. He resigned from the Microsoft board in 2009, following a second round of treatment for the cancer – but by that time, his interests had broadened considerably.

As well as interests in philanthropy, computer museums, the arts and music, Allen had a fascination with underwater archaeology (his research vessel discovered wrecks such as a Japanese Second World War battleship and the USS Lexington), a six-engined, 227-tonne monster spaceplane Stratolaunch, and collecting Second World War relics, such as a V2 missile.

His biggest business stumble was Charter Communications, which filed for bankruptcy in 2009.

Vulcan CEO Bill Hilf emphasized that Allen had already considered the future of his activities upon his death: “Paul thoughtfully addressed how the many institutions he founded and supported would continue after he was no longer able to lead them … We will continue to work on furthering Paul’s mission and the projects he entrusted to us. There are no changes imminent for Vulcan, the teams, the research institutes or museums.” ®