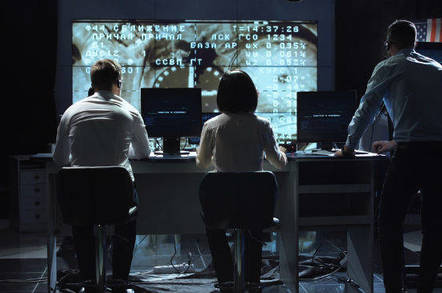 October is shaping up to be a lousy month for NASA. First, the Hubble space telescope went into hibernation. Then a Russian Soyuz rocket failed to get its astronauts and kit up to the orbiting International Space Station. And now the American agency's Chandra X-ray Observatory, tens of thousands of miles from Earth, is kaput – temporarily, we hope.

NASA confirmed on Friday that the space 'scope, which has been circling Earth for nearly 20 years, spontaneously put itself into safe mode at 0955 ET (1355 UTC) on Wednesday. That means failsafe backup systems have taken over from primary hardware, it has orientated itself so its solar panels are receiving maximum sunlight in order to guarantee power, and all science experiments are halted. The cause may be a dodgy gyroscope confusing the computer system, forcing it to take action before any damage is done.

"Analysis of available data indicates the transition to safe mode was normal behavior for such an event," NASA said in a statement today. "All systems functioned as expected and the scientific instruments are safe. The cause of the safe mode transition (possibly involving a gyroscope) is under investigation, and we will post more information when it becomes available."

Whatever the cause this is going to ruin a few NASA engineers' weekends as they try and get it back online. Doing technical support on a device doing a mile a second roughly 65,000 to 85,000 miles away (100,000 km to 140,000 km) on an elliptical orbit is, as eggheads say, non-trivial.

Chandra – dubbed "NASA's flagship mission for X-ray astronomy" – was lofted into orbit last century by the Space Shuttle Columbia, and had a planned five-year lifespan. A report in 2004 reckoned the probe could last for 15 years from its 1999 launch date.

In its 19 years of operation, Chandra has shown us the first images of a shockwave from a supernova, snapped galaxies in the process of merging, revealed different types of black holes, and played a key role in preparing the route for the New Horizons probe flyby of Pluto and other Kuiper belt objects in the future.

The safe mode move doesn't mean the end for the 'scope, or so we hope. NASA is good at jury-rigging repairs on orbital platforms, however, until the issue that caused the shutdown is found, the team will have a tough job on its hands. ®