The spikey satellite is not for the faint hearted, it appears 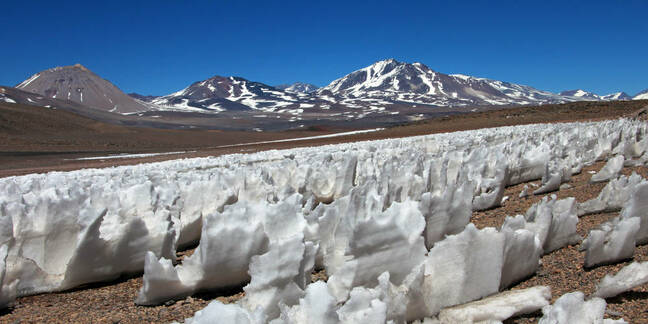 Exploring Jupiter’s moon Europa will be a treacherous task, it seems: scientists reckon its surface is covered in sharp towering icy daggers.

The menacing shards are known as penitentes, according to a paper published in Nature Geoscience this week. They normally form in dry cold climates, where sunlight melts snow and it sublimates straight to water vapor.

On Earth, these structures have been spotted pointing in the direction of the Sun in the Andes and can reach up to five meters tall. Researchers from Cardiff University in the UK, and the NASA Ames Research Center and the University of Virginia in the US, estimate that conditions on Europa can nurture the growth of penitentes to almost 15 metres or 50 feet in height, with a spacing of 7.5 metres.

“The unique conditions of Europa present both exciting exploratory possibilities and potentially treacherous danger,” said Daniel Hobley, lead author of the paper and a lecturer at Cardiff University.

These blades could make it difficult to land a spacecraft on its surface. Space agencies like NASA are already gearing up to explore the alien body as eggheads believe it is harboring a liquid ocean beneath its icy surface and has other properties such as a rocky core that might make it suitable to support extraterrestrial life.

The camera aboard NASA’s Galileo spacecraft that orbited Jupiter and its moons until 2003 could not directly capture images of Europa’s penitentes. Instead, the researchers have relied on indirect observations using radar data. They found that the regions near the equator reflect radar waves more readily than its poles, and the reflection patterns are best explained by the existence of these icy blades.

NASA is planning to send Europa Clipper spacecraft to explore the moon in 2022 and 2025. Luckily, it’s only an orbiter and won’t have to land. It will be equipped with a high-resolution camera to capture the structures and could help scientists plan any follow-up missions. ®