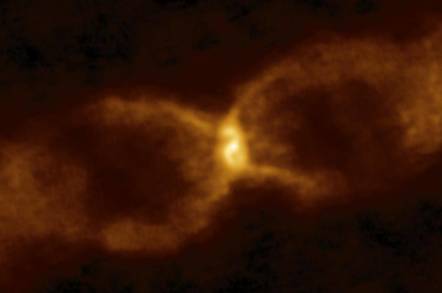 CV Vulpeculae, possibly the first collision ever seen between a white and brown dwarf star

Astrophysicists have finally solved a mystery lasting almost 350 years to uncover the first documented merger between a white and brown dwarf star.

Père Dom Anthelme, a French astronomer and monk, described a vivid outburst in the skies below the constellation Cygnus, which is allegedly shaped like a swan, back in 1670. Scientists have long believed the star in the constellation dubbed CK Vulpeculae to be a nova, a type of star that suddenly flares up, shining bright for a while before fading out.

Novas are created when two nearby stars begin merging together. The most common type, dubbed classica novas, are between a white dwarf and a main sequence, sub-giant, or red giant star. The white dwarf starts sucking material from its companion to create a shroud of hydrogen gas around it. As it heats up, the gas reaches a temperature hot enough to begin fusing, reviving the leftover dead core temporarily.

The explosion spotted in 1670 isn’t a classic nova however, according to a group of researchers. In a paper published in the Monthly Notices of the Royal Astronomical Society, the team claim that the source of brightness is, in fact, between a white and brown dwarf star - the first of its kind.

Some just don't have star potential

Brown dwarfs are a class of objects that are have about 15-75 times the mass of Jupiter, and aren’t massive enough to kickstart the hydrogen fusion process and so they never make it to the main sequence stage to become a normal star.

By digging into observations of CK Vulpeculae with the ALMA telescopes in Chile, the researchers have uncovered evidence that the star isn’t a typical nova. Charles Woodward, co-author of the paper and a physics and astronomy professor at the University of Minnesota, compared the violent merger event as putting “salsa fixings into a blender [without] a lid on”.

“The white dwarf was like the blades at the bottom and the brown dwarf was the edibles. It was shredded, and its remains spun out in two jets - like a jet of goop shooting from the top of your blender as you searched frantically for the lid."

The researchers also found traces of lithium, and molecules of formaldehyde and methyl alcohol, produced from the collision of the stars. A telltale sign was the amount of dust in the debris around the star.

It measured at about one per cent of the mass of the Sun. "That's too high for a classical nova outburst and too low for mergers of more massive stars, as had been proposed earlier," said Sumner Starrfield, co-author of the paper and a professor at Arizona State University.

The leftover star is still shedding material. "Collisions like this could contribute to the chemical evolution of our galaxy and universe," said Robert Gehrz, co-author of the paper and a physics and astronomy professor at the University of Minnesota. "The ejected material travels out into space, where it gets incorporated into new generations of stars." ®