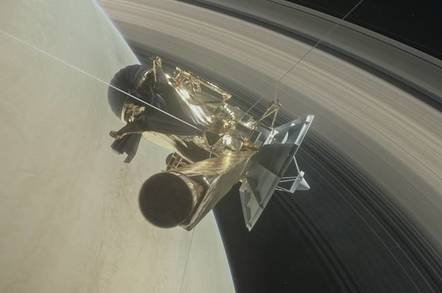 Scientists are only beginning to discover just how complex Saturn’s ring system is after digging into the data collected by NASA’s Cassini spacecraft.

In a series of papers published in Science and the Geophysical Review Letters, different groups of researchers have found that the rings shed organic compounds and they may not be a permanent feature. Additionally, the whole planet is shrouded in a newly discovered radiation belt made up of energetic protons and electrons.

The last of Cassini’s fuel was saved for one last nosedive into the depths of Saturn’s atmosphere, where it vaporized. Before then, the spacecraft dipped in and out of the planet’s rings a total of 22 times. The Ion and Neutral Mass Spectrometer (INMS) found that they contained not only water, but methane, ammonia, carbon monoxide, molecular nitrogen and carbon dioxide as well.

“What was a surprise was the mass spectrometer saw methane – no one expected that," said Thomas Cravens, coauthor of the paper published in Science and a professor at the University of Kansas, in the US, on Thursday.

"Also, it saw some carbon dioxide, which was unexpected. The rings were thought to be entirely water. But the innermost rings are fairly contaminated, as it turns out, with organic material caught up in ice."

The whirlwind of molecules were detected as they rained down and crashed into the INMS and vaporized into gas. Hunter Waite, lead author of the paper and the principal investigator of Cassini’s INMS team working at the South West Institute, estimated that the chemical cocktail of compounds was falling out of the rings much faster than previously thought – “as much as 10,000 kilograms of material per second."

The material in Saturn’s D ring, the innermost structure, is hurled into the planet’s atmosphere, contaminating the grains and dust there. The large shift of material probably means that the rings won’t be around forever.

“Because of this data, we now have shortened the lifetime of inner rings because of the quantity of material being moved out - it's much more than we thought before. We know that it's bumping material out of the rings at least 10 times faster than we thought,” said Cravens.

“If it's not being replenished, the rings aren't going to last - you've got a hole in your bucket. Jupiter probably had a ring that evolved into the current wispy ring, and it could be for similar reasons. Rings do come and go. At some point they gradually drain away unless somehow they're getting new material."

The new proton belt discovered around Saturn is there to stay, however, according to a paper published in the Geophysical Research Letters journal. The particles are are carried by intergalactic cosmic radiation and trapped around the planet by its magnetic field.

Scientists believed that the radiation belt might exist after Cassini’s initial measurements taken by its Magnetospheric Imaging Instrument in 2004. But they couldn’t confirm it until the mission was over 13 years over.

“Only 13 years later, shortly before the end of the mission, we were given the opportunity to follow up on our very first measurements at Saturn and see if an additional radiation belt sector co-exists with the D-ring and the upper atmosphere of the planet,” said Elias Roussos, lead author of the paper and a scientist at the Max Planck Institute for Solar System Research. ®