It's over 9,000! Boffin-baffling microquasar has power that makes the LHC look like a kid's toy 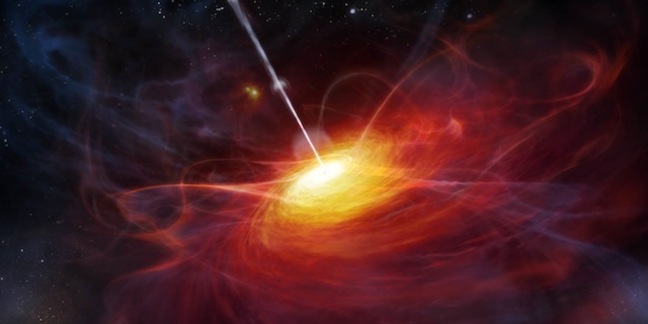 Artist's impression of a quasar in happier times

The first microquasar us Earthlings have detected has left astrophysicists puzzled.

Microquasars are greedy black holes that gobble up material from stars hovering nearby and shoot out powerful gamma ray beams. One particular specimen, codenamed SS 433, emits two jets that have energies measuring at least 25 trillion electron volts (25 x 1012), we learned this week.

An international group of researchers believe the source of radiation is a group of electrons that have energies exceeding hundreds of TeV trapped in a magnetic field. For reference, the world’s largest and most powerful particle accelerator, CERN's Large Hadron Collider, maxes out at 14 TeV, while its Large Electron-Positron Collider once hit 209 GeV.

"What's amazing about this discovery is that all current particle acceleration theories have difficulties explaining the observations," said Hui Li, coauthor of a study of SS 433 published in Nature and a researcher at the Los Alamos National Laboratory in the US. "This surely calls for new ideas on particle acceleration in microquasars and black hole systems in general."

SS 433 is roughly 15,000 light years away, and its jets don’t point directly to Earth, making it difficult to study. The team has to monitor the particles indirectly at the High-Altitude Water Cherenkov Gamma-Ray Observatory nestled in Sierra Negra, an extinct volcano in Mexico.

The results show that the particles in the jets are accelerated to energies higher than what can be achieved at the Large Hadron Collider and the Large Electron-Positron Collider. It’s unclear what mechanism is driving these particles to such high energies.

“The new findings improve our understanding of particle acceleration in jets of microquasars, which also sheds light on jet physics in much larger and more powerful extragalactic jets in quasars," said Hao Zhao, coauthor of the paper and a physicist also working at the Los Alamos National Laboratory. ®