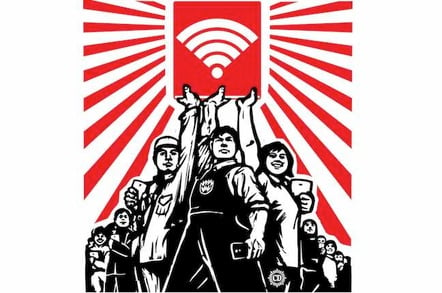 Wi-Fi, known for about two decades by its wonky Institute of Electrical and Electronics Engineers designation, IEEE 802.11, has adopted a new consumer-oriented naming scheme.

The latest version of the specification, 802.11ax, has been renamed Wi-Fi 6 by the Wi-Fi Alliance, the Austin, Texas-based trade association responsible for overseeing Wi-Fi technology branding and product certification.

This noob-friendly generational naming convention is being applied retroactively, so no longer will you refer to 802.11ac or 802.11n. Instead, say Wi-Fi 5 and Wi-Fi 4 when conversing with members of the general public.

"For nearly two decades, Wi-Fi users have had to sort through technical naming conventions to determine if their devices support the latest Wi-Fi," lamented Edgar Figueroa, president and CEO of Wi-Fi Alliance, in a statement.

"Wi-Fi Alliance is excited to introduce Wi-Fi 6, and present a new naming scheme to help industry and Wi-Fi users easily understand the Wi-Fi generation supported by their device or connection."

The Register asked the Wi-Fi Alliance whether anyone actually complained about the baffling alphanumeric jumble that refers to the spec. We've not heard back.

The simplified numeric designation, however, should soon show up in the icons appearing on Wi-Fi-enabled devices. Instead of presenting three concentric arcs representing Wi-Fi spectrum radio waves on screen, devices should soon show UI graphic adorned with the appropriate Wi-Fi version number.

Wi-Fi 6 should be able to achieve almost 40 percent higher peak data rates than its predecessor, or so says Intel. Devices previewed earlier this year were topping out around 11 Gbit/s.

Put your tin-foil hats on! Wi-Fi can be used to guesstimate number of people hidden in a room

But Wi-Fi 6 has been designed more for efficiency and reduced latency in device-rich environments than speed improvement.

OFDMA subdivides the frequency band into smaller segments to support more clients. According to the Wi-Fi Alliance, a 20MHz channel might be chopped into as many as nine subchannels.

Wi-Fi 5 implemented Multi-User, Multi-Input, Multiple Output (MU-MIMO), which can deliver data across four streams at once, but only via downlink. Wi-Fi 6, which runs in full-duplex (up and down) MU-MIMO, supports eight streams, allowing each to service multiple devices.