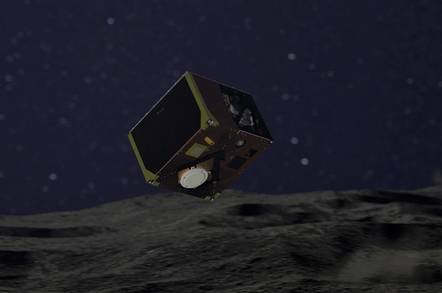 Not content with unleashing a couple of robots to photograph the surface of asteroid Ryugu, JAXA probe Hyabusa2 successfully deployed the German MASCOT lander this morning.

Released by means of a spring-loaded plate, the Mobile Asteroid Surface Scout was deployed from the Hyabusa2 51 metres above the surface of the asteroid, 300 million km from Earth, at 0157 UTC. Nervous scientists at the German Aerospace Centre (Deutsches Zentrum für Luft und Raumfahrt – DLR) received confirmation that the landing was successful following what could best be described as a gentle saunter over to Ryugu.

The @DLR_de @CNES @MASCOT2018 lander has landed safely on asteroid Ryugu and is in contact with its team! #AsteroidLanding https://t.co/Y8w1HhqpzB

MASCOT, developed by the DLR in conjunction with the French National Centre for Space Studies, has only a very brief window of opportunity to do its science on the asteroid since, unlike the rovers, it is powered by a non-rechargeable battery.

In the 16 hours before the power runs out, scientists plan to put the four instruments onboard the 9.6kg lander to good use. A wide-angle camera, which has already captured images during the descent, will then take snaps of the surface, the first of which rolled in this morning.

Hello #Earth, hello @haya2kun! I promised to send you some pictures of #Ryugu so here’s a shot I took during my descent. Can you spot my shadow? #AsteroidLanding pic.twitter.com/dmcilFl5ms

Since the gravity of Ryugu is so weak, engineers expected some bouncing when MASCOT landed, and included a swing arm in the 30 x 30 x 20cm box so the lander could change orientation if needed. MASCOT needed to be smart enough to do this itself – the lengthy wait for communication from Earth meant that engineers in Cologne would be unable to intervene.

Once MASCOT has taken all the measurements it needs, a flywheel will be used to change the lander's location in order to repeat the process. Scientists plan a third move to grab a final batch of data before MASCOT's 200Wh battery is finally depleted.

The data will be transmitted back to Earth via Hyabusa2 and as well as providing scientists with months or years of analytical work will also give JAXA some pointers for where to grab some samples with the next lander.

Although MASCOT will have long stopped functioning by the time NASA's InSight probe lands on Mars, one of its instruments will live on (PDF) in the form of the HP³ radiometer carried on the Martian probe. The instrument, which also carries heritage from the Philae lander, will be used to characterise the surface temperature of the red planet. ®