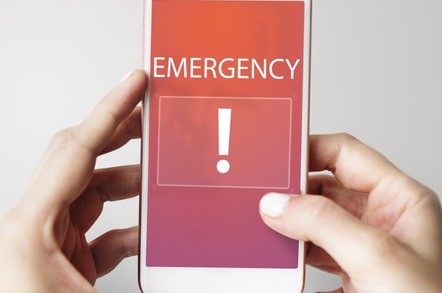 At 2:18 pm EDT on Wednesday (11:18 am PDT), most mobile subscribers in the US can expect a "Presidential Alert" to brighten their day.

It won't be the typical Trump tweet; rather the Integrated Public Alert and Warning System (IPAWS) will be testing the Wireless Emergency Alerts (WEA) and Emergency Alert System (EAS), under the auspices of the Federal Emergency Management Agency (FEMA), with the blessing of the Federal Communications Commission (FCC).

You know it's serious government business from the number of acronyms involved.

"Cell towers will broadcast the WEA test for approximately 30 minutes beginning at 2:18 pm. EDT," FEMA explains on its website. "During this time, WEA compatible cell phones that are switched on, within range of an active cell tower, and whose wireless provider participates in WEA should be capable of receiving the test message."

The WEA part of the test comes first. The WEA is used to warn people about severe weather, missing children (AMBER alerts), and other critical events via cell phone.

The message will say: “THIS IS A TEST of the National Wireless Emergency Alert System. No action is needed.”

The EAS portion follows at 2:20 pm. The EAS, familiar to those who have grown up in the US, is used to broadcast national emergency alerts over television, radio, cable, satellite radio and other pre-internet mass media channels.

There is no way to opt out, though a few folks may miss out due to technical issues and carrier quirks. The WEA test can, however, be ducked by powering your phone down. And EAS alert can be avoided with a mass media fast. ®

A Prompt response to insecurity