Hunt for Planet X finds yet another planetoid, just not the right one 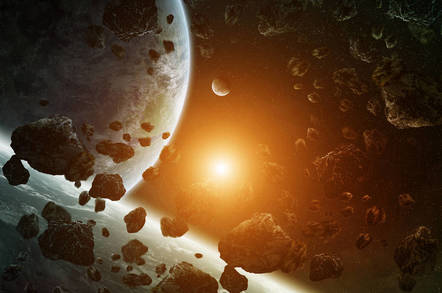 There is still no sign of the elusive Planet X, although astronomers have stumbled across Goblin along the way.

A new dwarf world hailed as 2015 TG387 nicknamed Goblin was confirmed by the International Astronomical Union. It was discovered by a group of researchers working at the Carnegie Institution for Science, Northern Arizona University, University of Hawaii and the University of Oklahoma.

The eggheads have classified Goblin as an inner Oort Cloud object since it hovers within the shell of distant icy objects covering the Solar System. Goblin lies about 80 AU from the Sun, making it 80 times more distant than the Earth is from our star, and has a diameter of 300km.

“We think there could be thousands of small bodies like 2015 TG387 out on the solar system's fringes, but their distance makes finding them very difficult," said David Tholen, an astronomer at the University of Hawaii, this week.

"Currently we would only detect 2015 TG387 when it is near its closest approach to the sun. For some 99 per cent of its 40,000-year orbit, it would be too faint to see, even with today's largest telescopes.” 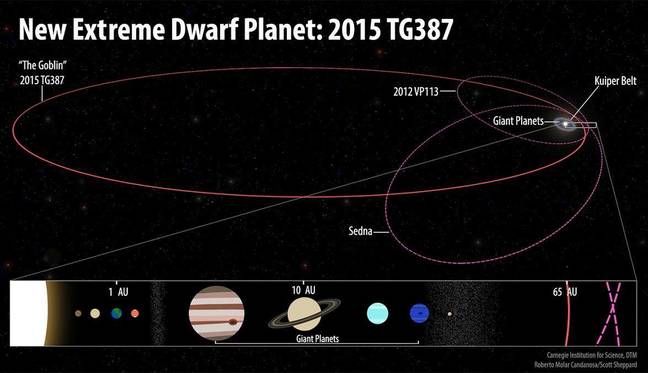 Diagram of the comparing the orbits of some of the inner Oort Cloud objects discovered so far. Image credit: Carnegie Institute for Science, DTM, Roberto Malor Candosa/Scott Sheppard

The object was spotted by Tholen at the Japanese Subaru 8-meter telescope in Hawaii. Follow-up observations revealed the closest distance it gets to the Sun is about 65 AU – almost twice as much distant as Pluto is from the Sun. Goblin has an elliptical orbit that brings it closer to the Sun but also flings it further away compared to other inner Oort Cloud objects like 2012 VP113 and Sedna.

The researchers believe that a hypothetical object dubbed Planet X may exist on the edges of the Solar System, helping to shepherd objects lying beyond Neptune. Simulations showed that adding a Planet X into the mix keeps Goblin’s orbit steady.

"These distant objects are like breadcrumbs leading us to Planet X," said Scott Sheppard, a researcher at the Carnegie Institution of Science.

"The more of them we can find, the better we can understand the outer solar system and the possible planet that we think is shaping their orbits – a discovery that would redefine our knowledge of the solar system's evolution."

The results of the simulations don’t point to anything conclusive, however, Chad Trujillo, an astronomer at Northern Arizona, said.

"Planet X seems to affect 2015 TG387 the same way as all the other extremely distant Solar System objects," he said. "These simulations do not prove that there is another massive planet in our Solar System, but they are further evidence that something big could be out there.”

The research has been submitted to The Astrophysical Journal. ®

X marks the... They SAID there was a mystery planet there – NASA