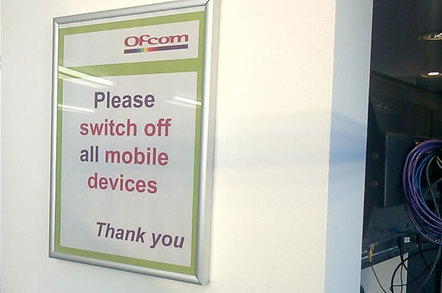 The two investigations were opened on 1 October and both will examine "whether there are reasonable grounds for believing" that each operator "has failed to comply with its obligations under sections 135 and 136 of the Communications Act 2003".

Ofcom requires comms providers (under sections 135 and 136 of the Communications Act) to "provide accurate information upon request, in a designated format, and within a reasonable time period", said the investigation notice published by Ofcom.

In Vodafone's case the regulator believes it had "under-predicted" its 800MHz/4G coverage, "particularly in rural areas". Vodafone, however, disputed this in a statement sent to The Register, claiming that using Ofcom's approved measures would have given a false picture of realistic signal and coverage levels.

"It appears that we may have been inadvertently under-reporting the extent of our 4G network coverage," said the mobile operator's Simon Gordon. "This is because the data we have been submitting is adjusted to reflect the signal customers actually receive on their mobile phones. This is the data we use internally to assess customer coverage, whereas Ofcom reports on the theoretical strength of the signal at the location of the handset."

Jauntily, he added: "The good news is that using Ofcom's measurement, our geographic coverage is up to 10 per cent higher."

Ofcom is investigating whether EE had overpredicted the extent of its 3G coverage in response to requests for information. A spokesman told The Register: "We've already updated our 3G coverage map in line with feedback from Ofcom, with only minor changes to the predicted coverage levels for our 3G network in some areas. Both our 2G and 4G networks are far larger overall, and have been in more places than 3G since 2016. This means our customers would have had voice coverage in these areas and there would have only been a difference in predicted data coverage for a very small number of customers in specific areas.

"We apologise for any confusion this may have caused, and we continue to work to give our customers the most accurate view of the coverage available to them so that they can make an informed decision about their choice of mobile network. This includes new ways to measure actual coverage experience, rather than predicted, such as tracking the time spent on 4G for individuals – all to help inform and continually improve our network performance across the UK."

Earlier this year BT Openreach was fined £70,000 (PDF) by Ofcom after the regulator decided that it had supplied incorrect information about Wholesale Local Access following a similar request from the regulator.

Ofcom conducts network testing itself as well as collating information from the networks themselves – but mobile network nerds have long moaned that the information available is insufficient to give a true picture of UK cellular coverage.