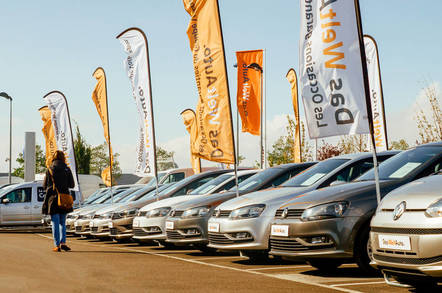 Volkswagen is plugging its cars – and your data – into a cloud built on Microsoft Azure.

"The Volkswagen Automotive cloud will be built from the ground up on top of Microsoft's Azure cloud and IoT Edge platform as its technology foundation," beamed Microsoft in a statement.

We are told that VW will be forking out for access to Azure IoT, PowerBI and Skype to offer more features and services to drivers.

"A driver might, for example, be listening to music at home and want to continue listening as she gets in her car, then need to jump on a conference call, then check her online calendar. Accessing those services on the road can be problematic, since applications from third-party providers typically don't talk to each other in a seamless way," continued Microsoft, seemingly not aware of the glaring road safety problem with reading a calendar while trying to drive.

The idea is to keep the driver connected with products such as Skype, as well as what appears to be a budding SaaS product line based around "in-car consumer experiences" while slurping up telematics data from the car itself.

"Volkswagen is also speeding up the development of its ecosystem with its own software know-how and the strength of external partners. We envision the automobile evolving into a central hub in the Internet of Things, enabling customers to take their world into their vehicles," said the German car maker's Heiko Huettel, chief of its connected car division.

Car makers are keen to get into the world of SaaS and recurring subscription revenue, and have the inbuilt advantage of ultimately controlling the end user's hardware. This plan includes the now-normal world of software updates for cars and the race towards better driver-assist technologies. VW envisions drivers of the future buying services "from their cars or through mobile apps". All of this, natch, is to be powered by Microsoft Azure.

Analysts at TMV remarked that the deal may "provide reassurances... for providers that harbour genuine concerns that they will be cut out of the IoT picture as car makers build and run their own data hosting platforms".