What's that coming over the hill? Is it a robot? A Windows robot? 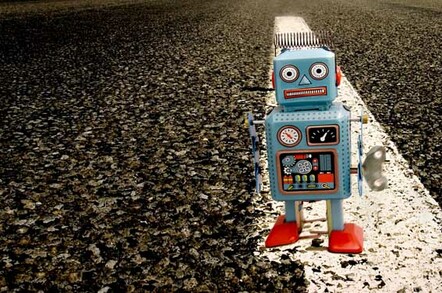 RoTM The robots are coming, and they will be powered by Windows. The Robot Operating System for Windows, that is.

Microsoft followed up its excited squeaking about Azure and productivity at Ignite last week by putting in a weekend appearance at ROSCon 2018 in Madrid, Spain to show off its very own trundlebot, a variant of Turtlebot 3.

The stunt was to announce the preview (Microsoft calls it "experimental") release of Robot Operating System (ROS) for Windows, which is a set of libraries and tools aimed at helping developers build complex robots.

ROS has, of course, been around for a while on Linux. By porting the thing to Windows, Microsoft hopes that developers familiar with Visual Studio will be able to get into the brave new world of robotics while keeping a tight hold on a familiar toolset.

Redmond is quick to point out that getting the platform on Windows will make it easier for developers to plug toys such as Windows Machine Learning and Azure Cognitive Services into home, educational and industrial robotics.

Certainly, the latter category could represent a handy revenue stream for Microsoft as it continues to pitch its Windows 10 IoT at industry.

Visitors to Madrid fearful of a lumbering, Azure-powered droid running amok following an ill-timed lightning strike need not have been concerned. Microsoft used a TurtleBot 3 chassis from Robotis and outfitted the thing with Windows 10 IoT Enterprise running on an Intel NUC. The 12th release of ROS, Melodic Morenia, was used atop Windows.

The machine can recognise and steer towards the nearest person, but that's about it as far as the demo goes. For now, at least.

Microsoft is keen to get a foot into the door of "Industry 4.0", the next generation of manufacturing with robots that are more aware of their surroundings, simpler to program and safer to be around. To that end, the company has signed up with the ROS Industrial Consortium and is working on porting the code.

ROS1 and shortly ROS2 will be hosted by Microsoft, and developers can get their hands on the code right now, although we (and Microsoft) would caution that it is not exactly production quality.

It is possible to fire up a virtual version of TurtleBot 3 for those without multiple dollar bills to burn, and we managed to coax the code into life after a fashion. However, there are many reminders that this is a work in progress, and porting is still under way with rough edges aplenty.

The work is a clear pointer to where Microsoft is headed and The Register, for one, is looking forward to welcoming its new Windows-powered robotic overlords. ®