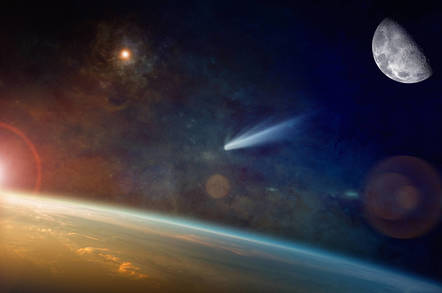 Molecules essential to life on Earth may have been delivered to our home world by meteorites and comets, according to the results of experiments.

Specifically, a team of brainiacs at the University of Hawaii in the US, National Dong Hwa University in Taiwan, and the Université Côte d’Azur in France, looked into the origin of phosphates – which are needed to form DNA and RNA, the blueprints for living cells and vital for reproduction. It's suggested these chemicals were possibly dumped on our planet by rocks slamming into us from deep space.

Phosphates are found in sugar molecules known as deoxyribose, in a chain that forms the backbone of DNA and RNA. These are twisted into a double helix shape where the four nitrogen bases – adenine, cytosine, guanine, and thymine – connect the structure together like rungs of a ladder.

It may be that these phosphates were deposited on Earth after being forged from chemical reactions involving phosphine, a compound containing phosphorus and hydrogen, that formed phosphorus oxoacids like phosphoric acid and diphosphoric acid. We know that phosphorus is formed from massive stars, but how it ends up as phosphates on Earth powering our ability to reproduce is a bit hazy to boffins.

"On Earth, phosphine is lethal to living beings," said Andrew Turner, lead author of the study published in Nature Communications this week.

"But in the interstellar medium, an exotic phosphine chemistry can promote rare chemical reaction pathways to initiate the formation of biorelevant molecules such as oxoacids of phosphorus, which eventually might spark the molecular evolution of life as we know it."

Turner and his colleagues tried to replicate the conditions of icy grains floating in the interstellar medium in a laboratory. They coated slivers of polished silver wafers with phopshine, carbon dioxide, and water ices. They then bombarded them with electrons in a vacuum chamber cooled to 5 Kelvin (-268 degrees Celsius). The electrons mimic the ionizing radiation from cosmic rays and the temperature matches the coldness of space.

After irradiating the samples, the researchers found that the phosphine had reacted to form phosphorus oxoacids like phosphoric acid and diphosphoric acid – key ingredients to create phosphates for DNA and RNA.

"The phosphorus oxoacids detected in our experiments by combination of sophisticated analytics involving lasers, coupled to mass spectrometers along with gas chromatographs, might have also been formed within the ices of comets such as 67P/Churyumov-Gerasimenko, which contains a phosphorus source believed to derive from phosphine," said Ralf Kaiser, coauthor of the paper and a researcher at the University of Hawaii.

Meteorites, and Comets like 67P, may have fallen from the skies to Earth to deliver phosphorus oxoacids that led to phosphates being developed on our planet, followed by DNA and RNA. Phosphine has also been spotted in the atmospheres of Jupiter and Saturn. ®