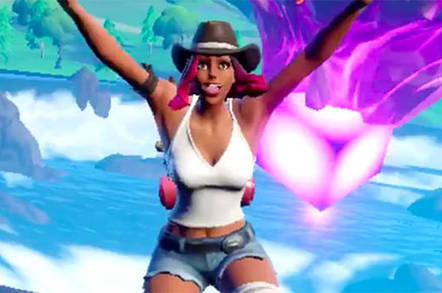 Video The maker of super-hit video game Fortnite issued a red-faced apology on Friday after its new female character was seen to have some extra wiggle.

The latest "season" of the game started this week featuring a new "skin" – a cowgirl named Calamity. But as gamers quickly noted, when she performs one of the games' trademark dances, her breasts dance as well.

One player posted a video on Twitter, which has currently been viewed over 500,000 times...

The most important thing in the Season 6 update pic.twitter.com/FrnzFsF1Fl

Epic has been very careful not to fall into promoting teenage boy fantasy stereotypes of women, as too many other games do, so women characters are often tough and feminine without being overly sexual. As such, breasts exist in the game, just as they do in real life, but behave normally rather shake around to, well, titillate players.

Not so Calamity and the Jubilation dance. And the movement is no mistake either: it bears the distinction of being more realistic than the dance itself, meaning that somewhere, some horn-dog developer has gone to some trouble to get the physics exactly right.

Epic was at least honest enough not to pretend it was anything other than what is was. "This is unintended, embarrassing, and it was careless for us to let this ship," said a spokesperson. "We are working now to fix this as soon as possible."

It does make you wonder though how much time games developers spend creating physics models for their own personal entertainment. Whoever came up with this particular example and accidentally committed it rather than the cleaner version they were supposed to provide clearly has some explaining to do.

And if Epic aren't sure who it was, can we suggest checking the logs for something similar to: "rmdir /Q /S fapfortnite." ®

Girlfriend 'tried to MURDER ME with her AMPLE BREASTS'

Battle of the Bulges: Germans in boudoir boob blitzkrieg

This genie is definitely not going back in the bottle

Is it true that a woman's breasts can grow enormously overnight?