Oracle: Go on, sign off on our exec pay packets. We've changed! 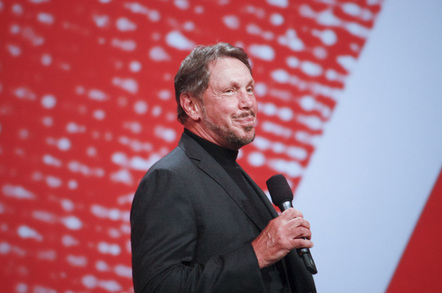 Oracle is hoping stockholders will finally approve its executive pay plan – having failed to get the thumbs-up for six years running – at its annual meeting in November.

The database giant would also like shareholders to vote down proposals that would require it to publish reports on its gender pay gap and political and lobbying spending.

Oracle's latest SEC filing, published ahead of its annual stockholder meeting on 14 November, sets out the proposals for that meeting and details execs' pay for fiscal 2018.

Each year, Oracle seeks shareholders' approval for the compensation plan, though this is an advisory vote, meaning the company can (and does) ignore it. Indeed, it has failed to gain majority support for the pay packet every year since 2012 – quite a feat when Ellison owns about a quarter of the company.

However, the board will be hoping for a turnaround, as it is the first year a new executive pay plan has been in place; under the new deal equity is only be doled out based on the performance of Oracle's cloud business and market capital.

And this week's filing confirms that none of the top-rung execs received their possible equity share for the year ended 31 May. This covers CTO and founder Larry Ellison, co-CEOs Mark Hurd and Safra Katz and cloudy president Thomas Kurian – who is on an extended break from the firm amid talk that his relationship with Ellison had broken down over differences in opinions on the cloud.

Their performance-based stock options (PSOs) are divided into seven tranches. One of these will only be paid out if Oracle's average stock price is $80 or more for 30 calendar days. The other six will be earned if Oracle achieves in two areas: market capital and cloud operations.

"None of the goals were satisfied in fiscal 2018, and thus no portion of the PSOs have been earned to date," the document stated – in news that will be of little surprise to Oracle-watchers.

But before anyone feels too sorry for them, the execs' cash bonuses – which are linked to growth in non-GAAP pre-tax profits – are significantly higher than they were in 2017.

As well as voting on the pay plan, shareholders will be asked to reject proposals calling for more transparency in the business.

This includes demands from Pax World Mutual Funds for Oracle to report its gender pay gap. The proposal pointed out that the UK arm of the firm had to do so this year, due to a change in the law, and that Big Red's peers Apple, Microsoft, eBay and Salesforce do so too.

Oracle would prefer not to, saying that although it is committed to diversity and inclusion, drawing up such a report "would be costly and time-consuming" and "would not lead to meaningful gains in support of workforce diversity and gender pay equity" because it already has some schemes in place.

Similarly, the firm doesn't want to publish reports on its spending on political campaigns or lobbying, pointing out that its competitors don't do this – which it argued would put it at a commercial disadvantage.

Shareholders will also be asked to approve 14 directors to the board, which includes two men that proxy advisor Institutional Shareholder Services last year recommended clients do not vote for: Michael Boskin and Bruce Chizen.

This was on the grounds that both sit on the company's audit committee, and the advisor has concerns about the committee's risk oversight given Ellison's continued pledging of Oracle's shares as collateral in personal loans.

Although Oracle adopted a pledging policy in January this year that prohibits directors, executive officers and family members from doing this, the policy had two exceptions: one was that Big Red's founder "may continue to pledge Oracle securities as collateral to secure or guarantee indebtedness".

Seems that everything always turns up Larry. ®