Bandwidth Alliance decides to throw us a bone 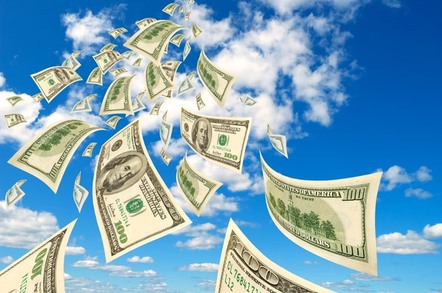 Updated The Cloudflare content delivery network (CDN) has teamed up with Microsoft, Google, IBM Cloud, and others to form the Bandwidth Alliance, a group of companies committed to trimming fees for data passing through the CDN.

The initiative follows from Cloudflare's experience with Google's CDN Interconnect program, which has led to data transfer discounts of up to 75 per cent for customers using both Google Cloud and Cloudflare, or so Cloudflare claims.

With Microsoft working on a similar CDN interconnect program, Cloudflare has decided to take the concept to a broader set of partners. In addition to IBM Cloud, and Microsoft Azure, the group includes Automattic, Backblaze, Digital Ocean, DreamHost, Linode, Packet, Scaleway and Vapor.

Cloudflare operates a paid service called Argo, which offers more efficient network routing than routers using Border Gateway Protocol (BGP). The Bandwidth Alliance provides a routing-only version of Argo to customers working with member organizations and Cloudflare, so their network traffic gets sent to the Cloudflare location nearest the customer, whereupon it gets passed through a Private Network Interface that involves very little in the way of cost.

"[B]ecause BGP and standard path discovery techniques are not built to directly understand either real world performance or monetary cost, moving traffic from Cloudflare to our Bandwidth Alliance partners and back may not actually use these fast, cheap links between us and them," said Cloudflare product director Rustam Lalkaka in a blog post.

In a phone interview with The Register, Cloudflare CEO Matthew Prince described a scenario in which a customer is hosting an application on an IBM Cloud data center in Ashburn, Virginia, and the person accessing it is in Sydney, Australia.

"To get the bytes from one place to another, you have to pay intermediaries," he said, pointing to network providers like NTT and Level 3 that incurred the cost of laying transatlantic cable and building other network infrastructure. "IBM then bears those costs to pay the transit provider. So it's reasonable to pass those costs on."

There's markups, and then there's profiteering

But according to Prince, those costs can be inflated. "The margins on bandwidth are thousands of percent in terms of markup in many cases," he said. Citing Amazon as an example, he added, "Amazon always talks about being extremely customer friendly but in terms of what they're changing customers, that's definitely a place they're not passing along the best deal."

"When IBM exchanges data with Cloudflare through a Private Network Interface," said Prince, "the data goes across a 100 meters of fiber optic cable from their router to ours. While there's a bit of cost to set that up, it doesn't cost much."

"Our question to other service providers is if we're not paying, why should the customer?" said Prince.

Prince likened cloud providers to Hotel California, where, as the Eagles song suggests, you can check in but never leave.

"It's free to put data in, but costly to get it out," he said. "What you really want to be able to do in a robust ecosystem is make it so someone could use the best of the different clouds without the cost of moving data between them."

Prince said the cloud industry appears to be interested in becoming more customer-friendly, pointing to the recently announced Amazon partnership with Salesforce and Microsoft's new data alliance with Adobe and SAP. "This is a trend toward the next iteration of the cloud, one that's much more about cooperation," he said.

He added that he hopes Amazon Web Services will join the Bandwidth Alliance. "I think it's inevitable that they will," he said. ®

A PR person for Cloudflare has been in touch to say that Google is not part of the Bandwidth Alliance. Cloudflare's blog earlier confusingly included a Google Cloud graphic in the list of companies offering discounted bandwidth. The spinner told us this after publication:

The section in the blog says “Partners Committed to Discounting Data Transfer Fees.” Google is not a founding member of the Bandwidth Alliance. They offer discounted data rates through their CDN Interconnect program (which we have been part of for the last three years), which is why they were included on that page.

We included a specific subhead for them to acknowledge that Google Cloud led the way in discounting bandwidth/data transfer fees with their CDN Interconnect program. We included logos for any company offering discounted bandwidth rates that is partnered with Cloudflare.