Vodafone and EE ship Apple's Watch 4, but not without LTE teething issues

Which gets you the best deal? We did the arithmetic 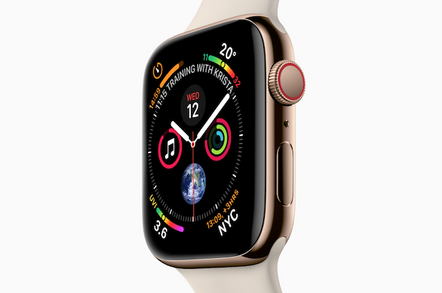 By popular opinion, Apple's most accomplished product of 2018 – and maybe even in years – has been its Watch Series 4. But wait, if you live in the UK, there are some things you should know about well before you pull out your wallet.

While fanbois can swan into an Apple Store today and emerge more than £1,000 poorer for the latest Apple phone bling, buying the accompanying wrist thing is a little more complicated.

Here's how it's looking. Delivery for Watches bought through the UK Apple Store has been promised for "23 Oct - 30 Oct". That's for both LTE and non-LTE models.

For LTE models you will need to go through EE or Vodafone, and both the Watch and the iPhone that it must be paired with will need to be on the same network. EE had exclusivity last year, but it has been joined by Vodafone for Watch Series 4.

However, customers have reported connectivity problems getting the Watch to use Voda's network.

We requested comment from Vodafone. Some reported fixes were applied overnight so the infrastructure is there.

Although Apple was mocked aplenty when it added LTE to the Watch a year ago – glitches marred the LTE Watch 3 experience and talk time was about an hour – anxiety about screen addiction has made Apple's move more appealing.

The eSIM inside the Watch still leaves you connected, so you don't miss important messages and even calls, but it doesn't tempt you to play games or browse Instagram. You can leave the phone behind. This was what Apple promoted last September: "freedom". 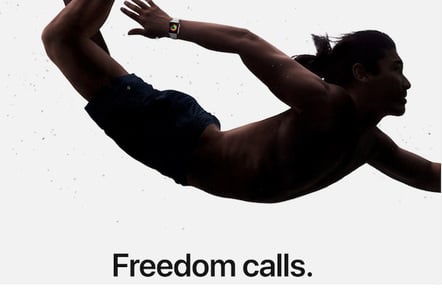 Apple markets the LTE Watch as freedom from lugging your phone about. Still from 2017 Apple video

Of course there are lots of caveats: a Watch can't act as a pure standalone LTE phone in the way an LTE watch from Huawei or LG can, with its independent SIM. But for joggers, as well as people wishing to ditch the phone for an evening out, there's some appeal.

Both EE and Vodafone offer a subset of the full range. Neither stocks the more expensive Stainless Steel models, although these are marginal even at Apple's site these days. EE offers more models, but Vodafone beats EE on TCO (total cost of ownership).

The numbers are complicated.

EE has offered both sizes of Watch 4 on a two-year contract for £29, so the TCO has been set at £696 or £725.99 once any upfront costs have been factored in. Customers that choose to source one from Vodafone will pay £695. But the attachment fee for Apple-acquired Watches on Vodafone has been waived for the first six months. So over two years the payment will be either £519 (£429 + {18 x £5}) or £619 (£529 + {18 x £5}). The best deal, therefore, is to acquire the Watch from Apple (requiring a hefty upfront payment) and then attach it to Voda's network (once the teething troubles have been resolved – and remember, users must be on a Watch-compatible Voda plan).

As ever, settling for an older Apple model pays dividends: a refurb 38mm Series 3 costs £480 over two years. And haggling will help even more, especially at renewal time. ®

* EE has been in touch to say that its units also began shipping on 14 September and that the 28-day dispatch time frame is due to "initial orders being extremely popular".