We've all got a little, er, Richardinsonia in our animal family tree, it appears 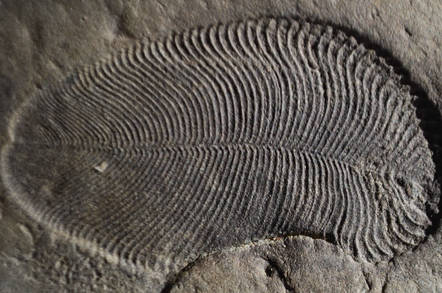 Video A fossil of the earliest known animal on Earth has been discovered in cliffs along the White Sea on the northwest coast of Russia.

The creature, known as Dickinsonia (yes, really), is believed to have been alive around 558 million years ago and could be found bimbling around on the bottom of the sea during the Ediacaran era. They have a round, flat, soft jelly-like body marked with ridges, also known as units. As they grow, the number and size of units increases. An adult Dickinsonia could reach up to 1.4 metres (4.6ft) in length.

Scientists have been studying Dickinsonia for more than 75 years and have debated whether they were truly animals or simply giant amoeba-like cells, a type of lichen, or even a fungus. The new study published in Science, however, has laid the argument to rest, confirming that Dickinsonia are, indeed, animals.

The vital clues was hidden in the fossil: fat. Molecules of cholesterol, produced only by animals, were found inside the sample using advanced scanning techniques. You can see the video explaining the science here:

“The fossil fat now confirms Dickinsonia as the oldest known animal fossil, solving a decades-old mystery that has been the Holy Grail of palaeontology," said Jochen Brocks, coauthor of the paper and an associate professor at the Australian National University (ANU), on Friday.

WINGED VELOCIRAPTOR 'from HELL': Closest thing ever to a real DRAGON?

Previous samples of the animal were not as well preserved to keep organic matter from degrading. Finding this particular specimen was a grueling task, said Ilya Bobrovskiy, co-author of the paper and a PhD student at ANU.

“I took a helicopter to reach this very remote part of the world - home to bears and mosquitoes," Bobrovskiy said.

"These fossils were located in the middle of cliffs of the White Sea that are 60 to 100 metres high. I had to hang over the edge of a cliff on ropes and dig out huge blocks of sandstone, throw them down, wash the sandstone and repeat this process until I found the fossils I was after."

Dickinsonia is part of the Ediacaran biota, a class that includes other soft-bodied organisms similar to jellyfish, sea anemones, or worms. They were alive during a period stretching from 635 to 542 million years ago - before the Cambrian explosion, where a period of intense evolution led a diverse group of animals, many of which are still alive today. ®