Got any ecsta-sea? Boffins get octopuses high on MDMA – for science, duh

Reach for the lasers, with all eight arms! 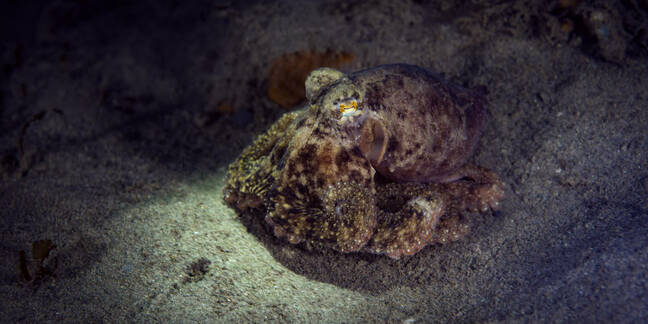 Just in case you forgot what a generic octopus looks like

Humans and octopuses may have drastically different brains, but both react in a surprisingly similar way when under the effects of the drug MDMA, more commonly known as ecstasy.

Octopuses are solitary creatures, preferring to slink around cracks and crevices in rocks on the seabed rather than bothering to socialise with their own kind. Some have even been known to kill and eat others of the same species.

But give them some class As (or schedule 1s for you Yanks) and they will get jolly on the molly. Seven unsuspecting California two-spot octopuses (Octopus bimaculoides) were dunked in a tank containing MDMA dissolved in saltwater. After ten minutes in the drug bath, the animals were put into a tank containing a toy and another octopus.

As euphoria kicked in, the cheery cephalopods began getting touchy-feely, stroking their friends’ abdominals and twirling around the tank in a trance. They also exposed their beaks – a part normally hidden underneath its bodies used for eating and mating – more frequently. The same sort of behavior has been observed in humans waving glow sticks in nightclubs flooded with deafening music thumping away at high numbers of beats per minute.

MDMA alters the brain by causing more of the serotonin neurotransmitter to be released. The chemical sticks to serotonin receptors and fires electrical pulses to excite axons, making people feel fuzzy and high. It looks like the same process happens in octopuses, too.

The results were published on Thursday in a study in Current Biology. Eric Edsinger, one of the coauthors and a researcher working at the Marine Biological Laboratory in Chicago, USA, was also involved in the genome sequencing of the California two-spot octopus, and identified the proteins responsible for serotonin uptake.

“The binding site for MDMA and serotonin in the ion transporter is 100 percent conserved between octopus and human," said Edsinger. "That is an extraordinary level of conservation. That means, pharmacologically, we could predict MDMA should work in octopus in the way it does in humans. It looks like it did."

Oh no, they're too loved up!

Edsinger and coauthor Gül Dölen played around with the disco biscuit dosage giving some octopuses more based on their body weight. In three pilot studies cases, the results were not included because the animals appeared to have overdosed.

Some began breathing very quickly or slowly, changing colour rapidly and a few went deathly white. They were hyper aroused and started moving crazily in a catatonic state. These animals “were excluded from further analysis,” and hopefully taken to a chill-out tank with Kruder & Dorfmeister piped in.

The human and octopus genome is separated by over 500 million years of evolution, and if a particular gene sequence has been conserved for that long then it must be very important, Edsinger said.

“A human is a massively complex system and if you just look within that system, it is hard to know what is relatively important," he added. "But if you compare it to the genomes of other animals, you can find the critical elements that evolution just hasn't been able to change over millions of years. From a pharmacological or medical standpoint, these are the elements - such as this serotonin transporter - that may be really important to make sure are functioning correctly."

Dölen, a researcher at John Hopkins University, Maryland, said they decided to conduct the experiment to test the use of MDMA for therapeutic purposes.

“We had no idea what to expect – and were definitely surprised and intrigued from the start,” Edsinger told The Register. It’s unknown if octopuses get the post-ecstasy blues, though. ®

Gadget win predictions are for suckers

Facebook's Sheryl Sandberg can't remember smear firm, but 'some of their work' crossed her desk