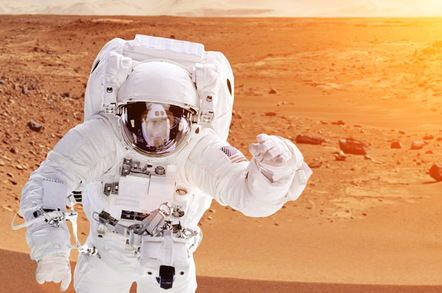 A year-long round trip to Mars could give you more than half the maximum radiation dose recommended for an astronaut's entire career, according to data collected by the ExoMars Trace Gas Orbiter.

The spacecraft, weighing in at over 4,000 kilograms (8,801lb), was launched by the European Space Agency and its Russian counterpart Roscosmos in 2016 to study the gases on Mars.

On its six-month trek through the Solar System to the Red Planet, the Liulin-MO dosimeter in its Fine Resolution Epithermal Neutron Detector (FREND) was used to measure the radiation bombarding the craft. The numbers it collected during this jaunt formed the basis of the following conclusion from ESA:

On a six-month journey to the Red Planet, and assuming six-months back again, an astronaut could be exposed to at least 60% of the total radiation dose limit recommended for their entire career.

It could be that the dosimeter hit a rough patch of space. The agency noted that radiation levels were high during the probe's interplanetary jaunt, though the alternative is weathering dangerous solar flares:

The ExoMars measurements cover a period of declining solar activity, corresponding to a high radiation dose. Increased activity of the Sun can deflect the galactic cosmic rays, although very large solar flares and eruptions can themselves be dangerous to astronauts.

Bear that in mind if you plan to visit Mars.

“Radiation doses accumulated by astronauts in interplanetary space would be several hundred times larger than the doses accumulated by humans over the same time period on Earth, and several times larger than the doses of astronauts and cosmonauts working on the International Space Station,” said Jordanka Semkova, lead scientist of the ExoMars Liulin-MO instrument, on Wednesday.

According to a paper [PDF] by Euro eggheads, the annual ESA limit for ionizing radiation is 0.5 sievert (Sv) for bone marrow, spleen, and lymphatic tissues, 1 Sv for your eyes, and 3 Sv for your skin. NASA reckons that the limit for radiation exposure in low-Earth orbit is 0.5 Sv per year. To put that all into perspective, the maximum dosage for people working with or around radioactive materials is 0.05 Sv a year.

And ESA reckons flying to Mars and back over a year could give you 60 or more per cent of an entire career's worth of that. The selection process for astronauts is rigorous, and they can’t be too young or old. The average age of selection is, apparently, 34, and the average length of a career is 14.8 years.

Radiation damages DNA. Collisions between energetic particles – mostly protons – and living tissue can kill cells or cause mutations, leading to a higher risk of developing cancer. But that’s not all: don’t forget it also comes with cognitive deterioration and a bad back.

As space agencies make tiny steps to gear up for a full-blown human expedition to Mars, they are all investing in radiation protection. Some organizations have even gone as far as considering filling the walls of a spacecraft with the astronauts' own waste as a protection measure.

The research collected from the ExoMars Trace Gas Orbiter is being presented this week at the European Planetary Science Congress in Berlin, Germany. ®

Houston? What does ‘No SD’ mean? Is this thing even on?