Waiting in line for hours and fancy some avocado on toast? Pathetic! 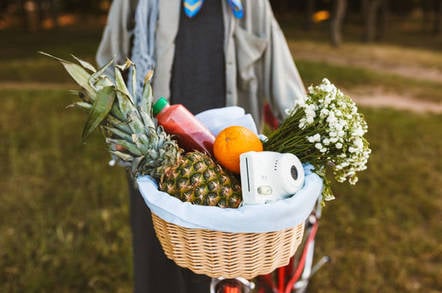 OK, I've got a smoothie for Alistair, one organic orange for Dave and a whole pineapple for Dante and a bunch of wildflowers from Hungry Honeysuckles... anyone?

The most shameless press release of the week award goes to Deliveroo for trying to share the limelight with Apple by offering to bike food to fanbois queuing for the latest iPhones released tomorrow.

“Forget crushed crisps and soggy sandwiches to snack on when waiting in the cold and rain to get the newest iPhone,” PR babble from the gig economy biz stated.

“Today, Deliveroo announces that it is coming to the rescue, delivering orders straight to the queues to stave off the rumbling bellies of tech enthusiasts across the country,” it added.

Apple customers will presumably be lining up to buy the latest iGadgets on Friday, though they will only be able to purchase the most expensive iPhones first - the XS and XS Max - with the other models due to hit the streets next month.

Ever the caring sort - except where its own workforce is concerned - Deliveroo said it has a plan to keep any hunger pains at bay while people - Apple fans are people too - stand in line to pray at the altar of dreams.

“Customers can order food from restaurants near their chosen Apple store and have it delivered to them directly in the queue, ensuring they don’t lose their place in line. Whether you fancy a smoothie, a fry-up or a bacon butties, Deliveroo has it covered.”

The iPhone X sold out in “minutes” on the first day of its release last autumn, so presumably any normie that didn’t pitch a tent to be at or close to the front of the queue, didn’t have to wait long to find out they weren’t going to get one.

“Deliveroo is always looking for new ways to make customers’ lives easier, if this launch is anything like last year’s, we know queuing for hours will mean lots of hungry people,” said Joe Groves, Deliveroo PR man.

If only the courier company wanted to make the life of its couriers easier: late last year a tribunal ruled that Deliveroo’s bikers were not entitled to fundamental employment rights as they are not deemed to be "workers". As such, riders are not paid a minimum wage or holiday pay.

The case was brought by the Independent Workers Union of Great Britain to pressure Deliveroo to agree to collective bargaining for members. ®