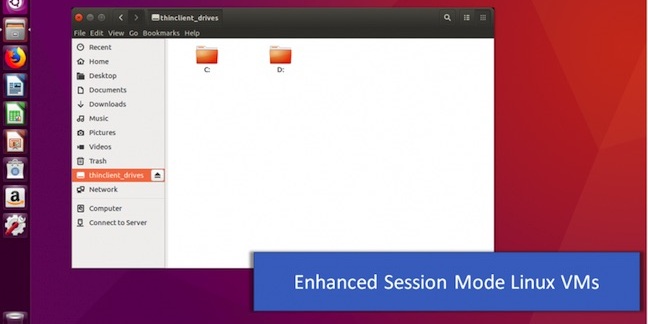 Windows 10 users have yet another way to run Linux, thanks to tighter integration between Ubuntu 18.04 LTS and Microsoft's Hyper-V hypervisor.

While creating a virtual machine using Hyper-V in Windows 10 is not a particularly arduous activity, the Fall Creators Update brought in a gallery of virtual machines to boot up on the hypervisor. As of this week, Ubuntu 18.04.1 LTS is available to quickly and easily install from that gallery on Windows 10 Pro, and is set up to take advantage of Hyper-V’s Enhanced Session Mode (ESM).

ESM showers Hyper-V guests with clipboard integration, dynamic desktop resizing, shared folders, and better mouse tracking between host and guest. Users of VMware's software or Oracle's VirtualBox, and their ilk, could well be forgiven for feeling a certain sense of deja-vu.

Microsoft had promised to make Ubuntu a "first class" Hyper-V citizen back in February this year, and Tuesday's announcement of an "optimised Ubuntu Desktop" image in the Hyper-V gallery is the culmination of those efforts.

For its part, Ubuntu-maker Canonical was quick to praise the work contributed by Microsoft to the open-source XRDP project to provide the high-bandwidth communication needed between the guest and host to make the magic happen.

Canonical’s Will Cooke explained that, judging from data collected by the Ubuntu Report tool, the distro maker could see that many people were running Ubuntu as a virtual machine, and so were keen to make the experience as simple as possible.

We at The Register are always keen to have our lives made easier, and so fired up Hyper-V to enjoy the benefits of ESM when using Ubuntu in a Hyper-V VM on Windows 10. The results were… mixed.

Installation of the virtual machine from the gallery required fewer clicks than pointing Hyper-V at an .ISO file downloaded from the Ubuntu website, but that was about it. Once in, there was little to immediately differentiate between an ESM Ubuntu install and a vanilla non-ESM install.

The “dynamic desktop resizing” was achieved via a Windows dialog box that, unsurprisingly, looked rather like one found on Microsoft’s Remote Desktop Client. Even with limited Linux skills, editing a Grub boot loader configuration file to add pixels to the desktop presented few problems, as an alternative to twiddling in the graphical interface.

Your humble vulture had some difficulty sharing folders between the host and guest using ESM. With the ease with which one can point a running Linux system at a Windows network share, we’ll probably take the latter path anyway, rather than faff with ESM shares. Getting sound working, alas, proved problematic. The mouse tracking was entertaining, too.

However, it was the clipboard where the "enhanced" functionality really came into its own. Being able to simply copy text, images, and files from guest to host, and back again with minimal fuss or need to resort to a fiddly user interface, was impressive.

Microsoft was chuffed to see its work being put to use, but also stated the obvious. There are other ways to get Linux apps up and running on a Redmond-powered PC, notably the Windows Subsystem for Linux (WSL).

However, if you can run Hyper-V, need a Linux app that can’t be run through WSL, and don’t mind using Ubuntu, then the ESM incarnation works well enough. Otherwise there is always VMware. ®

Microsoft to make Ubuntu a first-class guest under Hyper-V

And loads up the migration cannon to aim at VMware

Version 3.0 scales up, shows some container love and promises validation