Big Cable tells US government: Now's not the time to talk about internet speeds – just give us the money 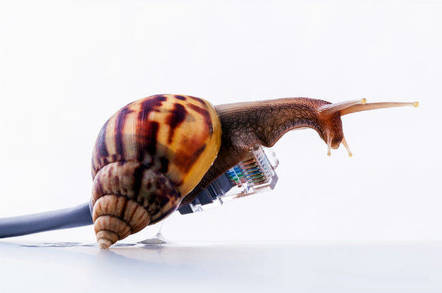 Big cable companies have told the federal government that "now's not the time" to talk about US internet speeds; despite a new program that will pay them billions of dollars to expand broadband access across the country, and a new proposal that put even more money in their pockets.

Yes, it is the annual farce that is the Federal Communications Commission's (FCC) Broadband Deployment Report – a Congressionally ordered report from the federal regulator that is used to assess how the US is doing when it comes to internet access.

The FCC is required to produce one every year and it is obliged to report whether or not Americans are receiving broadband in a "reasonable and timely fashion." If it decides they are not, it is empowered – and expected – to use its powers to push internet service providers to do more.

The FCC is also required to seek public input. And the period for providing that input is currently open, but closes on September 24.

In recent years, that comment period has been dominated over a key measure: just how fast is "broadband"? It is 10Mbps, 25Mbps, 100Mbps or higher?

This is a critical question because the final report says what percentage of US citizens are able to receive broadband speeds and what level of competition they enjoy at that speed.

If the speed goes up, the percentage and competition levels go down – and spark uncomfortable questions like: why is the most technologically advanced nation on the planet providing slower speeds to fewer people at higher cost than any other comparable Western economy?

One small step for man

Back in 2015, the FCC under its previous chair finally decided to increase the definition of broadband from 4Mbps down and 1Mbps up to at least 25 Mbps down and 3Mbps up. Despite it being a decision based on extensive, well-researched needs of the modern digital society, the decision was attacked by two of the five commissioners at the time, Ajit Pai and Michael O'Reilly.

Repeating arguments made first – and repeatedly – by the cable industry, the two commissioners argued that the speed increase was based on "hypothetical use cases" that "dramatically exaggerate the amount of bandwidth needed by the typical broadband user."

Those use cases being crazy concepts like more than one person watching video in a household at any given time.

The speed increase was passed with one commissioner – Jessica Rosenworcel – arguing that while it was a step in the right direction, a better measure would actually be 100 Mbps down and 10 Mbps up.

The increase had an immediate knock-on effect however and revealed that the United States continues to suffer from low internet speeds, prompting the FCC chair Tom Wheeler to warn that unless things improved in the next 12 months, he would use his powers to force the market to change.

And then the presidential elections happened. Wheeler was out, Ajit Pai was selected the new chair and, amazingly, the 2017 Broadband Progress Report – the first that would show how little improvement had been made – simply disappeared.

We're not joking – look at the FCC page listing all the reports since 2005 – every year a report has been published but 2017? Nothing.

What Pai did do however was try to change the definition of broadband to actually make it slower. He didn't outright suggest lowering the benchmark – that would have too ridiculous even for him – but he proposed a variety of changes including making mobile and fixed internet equivalent, and changing the definition in different areas to match the most common speed used by consumers, in order to make the market appear more competitive than it really is.

Fortunately, people were wise to the plan and the subsequent outcry forced him to stick with the existing speed of 25 Mbps.

Well, since then, the FCC's Pai has claimed his number one priority is broadband access to underserved rural areas – something that has been a political touch-point in Congress thanks to angry voters stuck with terrible internet access.

So the FCC has approved several schemes to subsidize new networks, amounting to billions of dollars that will be paid to cable companies directly. And it is considering a new proposal that would put a cap on how much local and state governments can charge for the positioning of new 5G cells on their property, something that one expert says is effectively putting more billions in their pockets.

And so, around has come the public comment period for next year's Broadband Progress Report and several groups have picked up on Commissioner Rosenworcel's argument from three years ago that a further increase to 100 Mbps would be a better indicator of true broadband speed.

"After three years of maintaining the current benchmark broadband speed, the Commission should take a bold, forward-looking approach and increase the national broadband standard from 25 megabits per second to 100 megabits per second (“Mbps”)," argues a comment [PDF] from Public Knowledge and Common Cause, two consumer advocates.

The two organizations point out that the FCC is obliged to establish "an evolving level of telecommunications services… taking into account advances in telecommunications and information technologies and services." And it argues that times have changed, so benchmarks need to as well.

In particular it notes that massive increase in streaming services in the past two years. Netflix has taken off, Amazon has joined. HBO launched its own streaming service; Disney is on the cusp of doing the same. The comment notes: "Amazon recommends a broadband connection of at least 15 Mbps and Netflix recommends 25 Mbps."

And then of course there is the explosion in online video gaming – yes. Fortnite, but others too. Plus the cloud storage market, video conferencing – FaceTime etc. Smart homes. Internet of things. They all need bandwidth.

The average household size in the United States have been just over 2.5 people for the last 20 years, so it makes sense to set the broadband benchmark at a speed that the majority of households actually want and need. And that is higher than 25 Mbps.

Needless to say, the cable companies are not in complete agreement.

The ITTA – the "voice of America’s broadband providers" – notes that these are crazy times. "This broadband deployment inquiry comes amidst a time of opportunity regarding next steps for deploying fixed broadband to unserved areas," it notes [PDF], before making it quite clear that that opportunity should not include faster internet speeds as standard.

"While aggressive speed goals are laudable - and should be pursued in the longer term - now is not the time to raise the stakes by reinterpreting what speed benchmark constitutes 'advanced telecommunications capability'," it argues.

Don't worry your pretty little head about it

Amazingly, despite having already fought and lost the argument, the ITTA then goes on to argue that the FCC should "continue to evaluate broadband deployment examining both fixed and mobile services" – suggesting the two may be equivalent.

It also argues the speed should stay at 25 Mbps because it would be "confusing" to change it. "With 25/3 Mbps currently being routinely used as a benchmark for fixed broadband in the universal service context, raising the benchmark to a new level is not advisable," it advises.

"This would be particularly inadvisable because 25/3 Mbps broadband continues to enable myriad advanced features, functions and applications." The speed is enough for people, it argues, they don't need more.

Amazingly, separate comments from the Internet & Television Association (NCTA), and US Telecom, and Verizon, and AT&T, and CTIA - which has the actual headline in its submission: "BY ANY RATIONAL MEASURE, MOBILE WIRELESS BROADBAND DEPLOYMENT IS REASONABLE AND TIMELY" - all agree.

So there you go, America. Everything is fine. You have as much internet as you need at a speed you require. So say the companies making billions of dollars in profit each year from providing those services.

Which just makes that much harder to explain why internet users, consumer groups, and even the US government seem so convinced otherwise. ®