Register hack learns the benefits of brimming the tank before flight 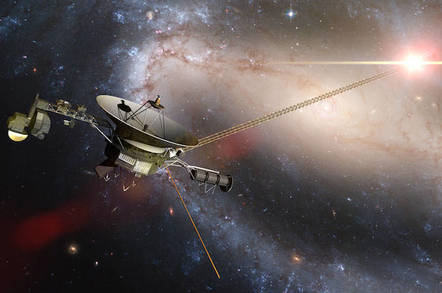 Interview It has been 41 years since the Voyager spacecraft left Earth to explore the outer solar system and, eventually, interstellar space. For the sole Brit on the Voyager imaging team, that journey began even earlier, in the 1960s, at Oxford University.

Dr Garry E Hunt, then 26, had been working on atmospheric research at Oxford and, at a conference in Tucson, Arizona in 1969, presented a paper on Jupiter that caught the attention of NASA bigwigs. The research, into detecting and removing clouds in spectroscopic analyses of atmosphere, would see Hunt spend the next 20 years working on a mission to the solar system's gas giants and beyond.

"In 1970," Hunt told The Register, "I went to JPL [Jet Propulsion Laboratory] as a full staff member," in the process selling his home and moving to the US.

It had been five years since Gary Flandro, then an aeronautics postgraduate also at JPL, had extended earlier work by a JPL mathematician, Michael Minovitch. The equations showed a mission could utilise the gravitational field of Jupiter to swing past not only Saturn, but also Uranus and Neptune while requiring minimal fuel. Some profiles even included a visit to Pluto. The only problem was that the launch had to happen between 1976 and 1978 – the next opportunity would not occur for another 175 years.

We had already realised that you could do Jupiter-Saturn-Uranus-Neptune, and we knew that if you filled up to brimming point the spacecraft with all the fuel it ever needed, it'd be OK. We did. But we never told anybody...

Hunt's arrival at JPL coincided with the Mariner 9 spacecraft arriving at Mars midway through an enormous Martian dust storm. As Hunt put it: "I was joyous as hell to get involved," rolling his sleeves up to work on the analysis of the dust clouds. His original brief, to develop methods of analysing the structure of the atmospheres of the Jupiter and Saturn using ground-based spectrographic observations, swiftly took a back seat in favour of what many at JPL had initially dismissed as a dead, moon-like planet.

The lessons learned by the mission, particularly the ability to update flight software to deal with changing conditions, would prove crucial during the Voyager missions which followed.

Introducing the Grand Tour (no, not that one)

However, as Hunt toiled away, developing techniques to remove the clouds from the data so the composition of the atmosphere could be defined, momentum was building at NASA to send something on Flandro's "Grand Tour". Between 1970 and 1972, Hunt also worked on feasibility studies for the mission.

JPL had already put forward a proposal to send four spacecraft on the Grand Tour. Known as Thermoelectric Outer Planet Spacecraft (TOPS), the probes were to be souped-up versions of their successful Mariner predecessors. Solar panels were to be exchanged for Radioisotope Thermoelectric Generators (RTG) to allow the spacecraft to venture beyond the point where the Sun's energy would be able to power the probes.

US Congress baulked at the cost of such a mission (NASA also had its handout for the Space Shuttle project) and a TOPS-based Grand Tour was cancelled in January 1972. It would be replaced by something initially a little more prosaic, which would adapt the existing Mariner platform. The missions were even known as Mariner 11 and 12, as if to underline their heritage. It would, of course, evolve far beyond its beginnings.

During this time, Hunt decided to return to the UK, having been courted by Sir John Mason, then director of the UK Meteorological Office, and an expert on cloud physics. As he focused on meteorology in the UK, Hunt wrote a proposal on using computer techniques to track clouds and obtain atmospheric velocities. Recent advances in imaging using the vidicon system meant that digital pictures could now be taken, with every pixel having a radiance. Unlike the existing analogue systems, "proper scientific analyses" could be done, Hunt said.

His proposal was just one of the 600 or so submitted to the imaging team of what was then known as the Mariner Jupiter-Saturn (MJS) mission. NASA chose nine, of which Hunt's was one. He was on the team. "I was the only Brit on the whole of Voyager. It was the first time anybody from the UK had ever been selected by NASA for a mission of that sort."

The UK Research Council was at a loss as to what to do, and it took the then NASA Administrator, Dr James Fletcher, to force the issue. The correspondence "reads like a horror story", Hunt recalled. Such were the limitations of 1970s communication technology that the notification of the selection sounds like something from another age. "I learned by telex that I'd been selected. It was December 6, 1972."

For the next five years, Hunt found himself balancing work in the UK at the Met Office with commuting to Los Angeles for his duties as a member of the nine-man team leading the MJS imaging platform. 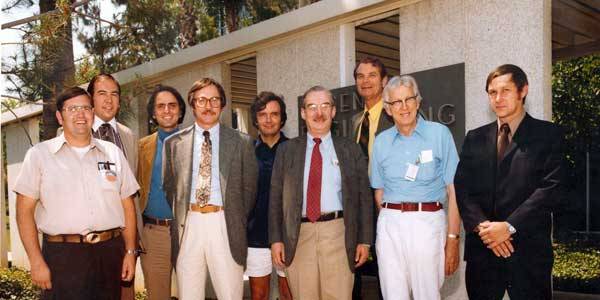 The imaging team, led by Brad Smith, who passed away in July of this year, were quick to select the vidicon camera to capture images. The vidicon, a precursor to the charge-coupled devices of today, is a camera tube, and the system fitted to the Voyagers could capture an image with a resolution of 800 by 800 pixels. Each pixel contained 8 bits of radiance data.

Each Voyager has two cameras, one wide angle with a 200mm focal length, and the other a narrow angle, 1,500mm unit. Each camera also has a wheel of filters, to capture colours and also filter for the likes of methane or sodium. Sodium was a late addition thanks a discovery made by earthbound astronomers looking at Jupiter's moon, Io.

As for the decision-making process, it was, Hunt said, "one of the biggest Wild West shootouts we've ever had at a team meeting, because we had all the youngsters saying, 'Yeah, of course we can have sodium. We can't not have a sodium filter on board. Just think of the images we're going to get around Io' while older hands, like the veteran Merton Davies worried, 'Just imagine if the filter wheel gets stuck, and everything you're then going to take is in that. Are you prepared to take that gamble?'"

Of course, the team did take the gamble, with the over-40s voting one way and the under-40s voting the other. It would not be the last gamble of the mission by any means.

Pioneer to the rescue

The odds for MJS were improved dramatically by the data returned by Pioneer 10 as it sped past Jupiter in 1973 and was blasted by the savage radiation belts surrounding the gas giant. It also recorded 10 strikes on its micrometeoroid detectors, leading to scientists deleting a similar instrument for MJS.

The knowledge was invaluable, even though there were huge differences between the probes. "That was a spinning spacecraft. This is a three-axis stabilised spacecraft, so it's a very different one. So we had to make sure the instrumentation would withstand it. We were dicing with death, because we're moving at 25,000 miles an hour, so it only wants a micron-sized piece of dust and it could take the spacecraft out."