Git it girl! Academy tries to tempt women into coding with free course 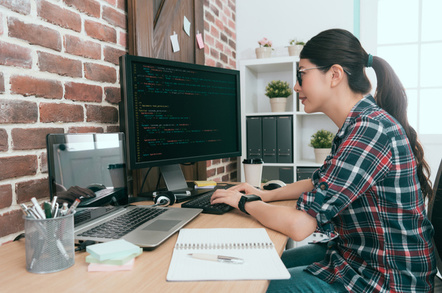 The Makers Academy has emitted a free programming guide and launched an apprenticeship scheme that it hopes will convince women to consider a career change as the tech sector's gender gap widens.

To mark the start of National Coding Week, the school, based in East London, England, also warned today that a decline in female students taking GCSE computing and ICT, combined with an already male-dominated sector, risks deepening the divide.

As El Reg reported last year, the number of kids enrolling has stagnated amid concerns about a lack of teachers and a tougher syllabus.

This is significantly lower than the number of male students on the courses: this year there were almost the same number of girls for both courses as there were boys enrolled on ICT alone (some 32,012). A further 57,245 male students took computing.

Warning that the UK needed to boost the sector ahead of Brexit, Makers Academy CEO Evgeny Shadchnev said that diversity was crucial in software development, and that women should be encouraged to consider switching careers.

'Diversity can't be an afterthought'

"We need more women training as software designers and programmers if we are to remain competitive in a post-Brexit world," he said. "Diversity can't be an afterthought in digital economy, and it is never too late to learn coding and consider a career switch."

In a bid to encourage them to make the move, or just develop new skills, the academy said it will offer a free course in writing Ruby code – in the form of a downloadable ebook – to coincide with National Coding Week.

It is also launching an apprenticeship scheme in software engineering education, which it said is the first of its kind in the UK. It's funded by the government's Apprenticeship Levy scheme, in which large organisations pay 0.5 per cent of their costs into a pot that can then be spent on training courses offered by registered providers.

The Makers Academy's apprenticeship is to be based on an existing bootcamp that the academy has run for more than five years, and will take just 12 months.

The first four months of the Level 4 software developer apprenticeship will be an intensive training programme, followed by a placement that will help students develop their professional skills.

Makers said that, since 2013, similar schemes had trained more than 1,400 – of which about a third were women – and that they had been placed with companies like Tesco, Santander and British Gas.

"Now that we are part of the official register of training provider, we will have more employers working with us – and even more young people coming forward to train as software engineers," said Shadchnev. ®