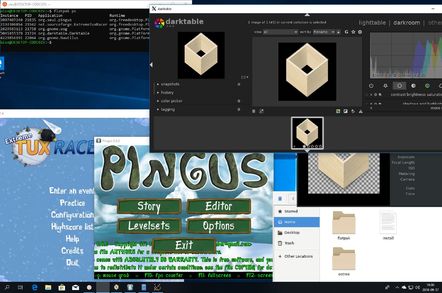 Flatpak and the Windows Subsystem for Linux (credit: Alexander Larsson)

Lead developer Alexander Larsson has announced that software package toolkit Flatpak now works on Windows (or rather the Windows Subsystem for Linux). After a fashion. But then where would Linux users be, if it were not for the need for a few hacks here and there to get their systems just so?

Flatpak on windows. It's got some hacky workarounds, but it basically works... pic.twitter.com/rHYYr45ckX

Of course, the whole point of Flatpak is that a user shouldn't be troubled with tiresome dependency problems or endless tweaking to get software to work on their preferred flavour of the Linux operating system. The primary goal of the framework, launched in 2016 after a few years being known as xdg-app, is to allow the same application to run across a myriad of Linux distributions, faff-free.

It appears that, for the brave at least, distributions running on Windows Subsystem for Linux (WSL) can be added to the list.

There are, of course, some challenges to overcome. In a blog posted today with links to the necessary bits of code, Larsson explained that a lack of support for seccomp or network namespaces limits things somewhat. Flatpak apps are, after all, supposed to be sandboxed and isolated from each other.

Larsson also pointed to a number of other bugs in WSL that make the whole thing a little less useful than it could be. In addition, apps that need Linux functions not present on the WSL platform (such as pulseaudio) could struggle.

Larsson told The Register that he doesn't have any immediate plans for the code at present, saying "this is just a bit of fun to see if it can work."

Giving credit where it is due, Larsson offered "massive kudos to the Microsoft developers" who worked on WSL. The Reg would offer similar kudos to Larsson for demonstrating what the technology is capable of. ®