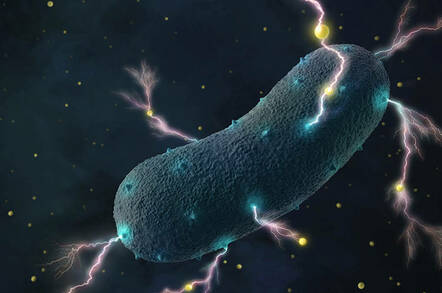 Scientists have discovered that a type of stomach bug contracted from unpasteurized dairy or raw meat can produce electricity.

Listeria monocytogenes is a pathogenic bacteria that causes listeriosis, a particularly nasty infection that can be fatal. Milder symptoms include diarrhea, but it can also lead to more serious diseases like meningitis and swelling of the brain.

But it has other interesting properties too, like producing electricity, according to a paper published in Nature this week. The transfer of electrons for energy production is well-known in bacteria. Scientists classify them as electrogenic bacteria, and the process normally happens in environments starved of oxygen.

"The fact that so many bugs that interact with humans, either as pathogens or in probiotics or in our microbiota or involved in fermentation of human products, are electrogenic - that had been missed before," said Dan Portnoy, coauthor of the paper and a professor at the University of California, Berkeley in the US. "It could tell us a lot about how these bacteria infect us or help us have a healthy gut."

The next big thing in medical science: POO TRANSPLANTS

Listeria monocytogenes tend to oxidize organic matter like sugars and the chemical reactions give off electrons. If these electrons are transferred to iron or electrodes, electricity can be generated. But don’t worry, Samuel Light, first-author of the paper and a postdoctoral fellow at UC Berkeley, told us that he hasn’t found any evidence that this actually happens in the human gut, yet. So, hold off from the idea of human battery farms - it’s not going to happen.

Caroline Ajo-Franklin, coauthor of the paper and a researcher from Lawrence Berkeley National Laboratory in the US, used an electrode to get an idea of how much electricity the bacteria produced and got a reading of up to 500 milliAmps. The team estimate that each bacteria cell can give off about 100,000 electrons per second.

“It’s hard to say for sure how many of the cells are actually responsible for the current, but the experiment was performed using the set up shown in the press release. In the electrochemical chamber there are approximately 100 billion bacterial cells,” Light told The Register.

The team hope to explore if the bacteria can be harvested to develop microbial fuel cells, help food fermentation, or treat water waste by breaking down organic pollutants. More importantly, they’re interested in what role the generation of electricity plays in getting the bacteria to spread in the gut. ®