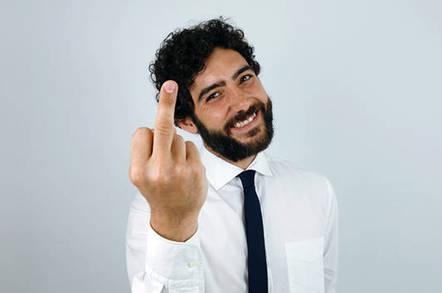 NSFW The US government has conceded that you can indeed fuck Nazis on the internet.

Yes, the "seven dirty words" made famous by the comedian George Carlin in 1972 were until just a few weeks ago also banned on the internet.

Well, the part of it actively managed by Uncle Sam, anyway: its .us registry.

The US government's Department of Commerce owns .us and contracts out its administration to Neustar. As part of that process, the seven banned words were written into the first contract signed in 2001, and been there since, meaning you couldn't register a .us domain name containing those naughty strings.

Until, that is, a guy named Jeremy Rubin grew incensed at the white nationalist rally in Charlottesville in 2017 – in which people marched through the streets literally chanting Nazi slogans, and three folks were killed – and decided to register his outrage online. He bought the domain name fucknazis.us, and set about building a website.

But soon after registering the name, he received an email putting the name on hold. Neustar said it broke its rules, ie: its contract with the US government. Needless to say, Rubin felt this was a first amendment violation, and pushed back, ultimately getting the Electronic Frontier Foundation (EFF) and Harvard Law School involved.

Somewhat unusually for the United States, the issue was resolved following a back-and-forth of views between the parties rather than a lawsuit. And then, in an absolutely incomprehensible contract amendment in July, the Department of Commerce rescinded the rule.

The implication of that change wasn't understood by anyone until last month, and this week Rubin got his name back – meaning that you can indeed now fuck with Nazis in the United States.

Using .us, we mean. You can swear using other top-level domains.

A short history of fucking

What most people don't know about Carlin's famous 1972 monologue is that the seven words he reeled off were not a formal list but one he had put together from his own observations of words that had been bleeped out on TV and radio over the years.

The origins of the list came when fellow funnyman Lenny Bruce was arrested, charged, and tried under obscenity laws after swearing on stage during his act. He later gave a list of nine words he had identified as being the ones that had seemingly broken the law. Those nine also featured in Carlin's subsequent list of seven – Bruce's bonus pair were "ass" and "balls."

The irony is that by naming them, Carlin's seven dirty words became a semi-official list a year later when his recorded show was broadcast on the radio. A man complained to the Federal Communications Commission (FCC) saying they were inappropriate for the time of day (roughly 2pm). John Douglas claimed to have heard the show while driving in his car with his 15-year-old son.

The FCC issued the radio station – WBAI, owned by Pacifica – an official warning and Pacifica appealed. The courts sided with Pacifica, and so the FCC appealed all the way to the US Supreme Court. The supremes then decided 5-4 that the FCC had not broken either the first or fifth amendments of the Constitution in its decision.

But there were lots of caveats, and the judgment was purposefully narrow, which led to a whole range of subsequent cases that effectively established a 10pm to 6am watershed. Even so, there was still no official list of words, and an effort to provide one in a 2003 Clean Airwaves Act never got anywhere.

The upshot of all of this is basically that if you are broadcasting over public airwaves, the FCC can decide to impose sanctions against you if you use obscene words – but not if they are "fleeting." Sometimes the federal regulator imposes fines; sometimes it doesn't.

But the FCC can only do so for radio and TV shows over public airwaves – so cable TV and the internet are exempt. A position that has, in a roundabout way, just been confirmed by the US government in its decision to remove the "seven dirty words" restriction on .us domain names.

Which means that, if you wish, you can do much more than fuck over Nazis with a .US internet address. Of course, as anyone who has been on the internet will recognize, this sudden lifting of restrictions doesn't mean, well, shit. ®

If you're interested in how the US government can turn something as lively as lifting a ban on swear words into something so unfathomable dull and incomprehensible that no one noticed it until months later, you can check out the contract amendment [PDF].

The relevant part? "This modification deletes, in its entirety, the Administrative Policy Statement found on page 1.4-34 under section 1.4.6.6 Domain Name Review (C.5.1.vi.f) of Neustar's technical proposal, which has been incorporated by reference into this contract. This modification is accomplished on a bilateral basis pursuant to mutual agreement of the parties as allowed by FAR 43.103(a)(3)."