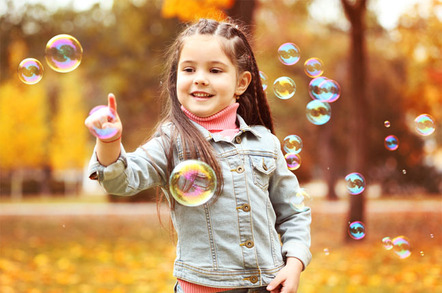 Video Fluid dynamics is weird. Physicists have reverse engineered the popping of a bubble and managed to keep it levitated just by using the power of sound.

Iridescent bubbles form when a film of soapy liquid is punctured. The film retracts from the hole and the molecules are pulled back and rearranged to reduce its surface area, forming bubbles that eventually pop and shatter into tiny droplets.

A team of physicists decided to study the process in reverse. Starting with liquid droplets, they can be manipulated to grow bubbles. Acoustic levitation is often used in fluid dynamics to suspend and control bubbles in the air using sound waves. The results were published in Nature Communications on Tuesday.

You can watch the experiment below.

Ultrasonic sound waves at highly energetic frequencies beyond the range of human hearing are emitted and reflected in between two plates. The pressure created from the waves keeps the bubble contained mid-air.

When the acoustic radiational force is applied to droplets, it stretches them into a thin film. As more pressure is applied, the film begins to buckle and grow into a bowl shape.

The volume of the bowl continues to grow and when it reaches a critical point, the air molecules trapped inside it begin vibrating at the same frequency as the sound waves to create a resonant cavity. Suddenly, the volume of the film inflates rapidly to form a spherical bubble.

The acoustically levitating bubbles can stay suspended and last over tens of minutes without popping. Eventually, the bubbles do burst into droplets as the liquid begins evaporating. The researchers believe that studying the bubble formation process in detail will help the storage of food, cosmetics, or pharmaceuticals. ®