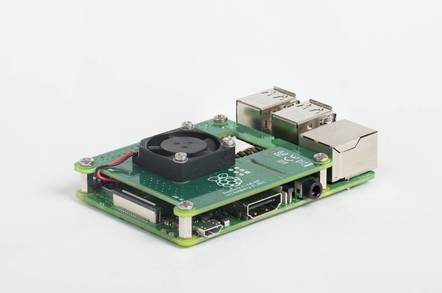 People are reporting problems with the newly released Power Over Ethernet adaptor for the new Raspberry Pi 3 Model B+, with non-functional USB ports causing much anguished wailing.

The Power Over Ethernet, Hardware Attached on Top (PoE HAT) board allows a Pi 3B+ to be powered over Ethernet rather than requiring its own power source. Up to 15W can be shovelled down cables using the 802.3af standard which should mean the PoE HAT has enough juice to power the Pi and anything that is plugged into it.

Except that, judging by the Raspberry Pi Foundation’s own forums, it doesn’t.

Users were eager to get hold of the device, which was announced at the same time as the Pi 3 Model B+ in March. It finally shipped in August and, for many users, the experience of the board, which plugs on top of the Pi and includes a cooling fan, has been less than positive.

While Raspberry Pi engineers struggled to come up with a solution, the ever-creative Pi community attempted to work out the problem for itself, with users registering surprising voltage fluctuations on oscilloscopes, soldering on additional capacitors or devising ways of keeping the fan running, which induced a level of stability for some.

Eben Upton of the Raspberry Pi Foundation told The Register that the problem lay with "an interaction between the fairly low-frequency switching regulator on the HAT, and one of the two brands of USB current limiting switch that we use on the main board".

Upton continued: "Because the regulator operates at a fairly low frequency, each time it switches it moves quite a large chunk of energy into the three USB reservoir caps via the current limiting switch: this large instantaneous current is fooling the switch into thinking that a genuine over-current event is occurring."

It was, Upton observed, "dumb luck" that heavy load testing was done with one brand of switch while lighter testing occurred with the other. Thus the PoE HAT passed product validation.

As a result of the problem, there are a "significant proportion" of HAT/Pi pairs delivering less than 200mA downstream current to USB, which might work for some mice or keyboards, but definitely not for something more power-hungry, such as hard drives. The Foundation obviously intends to fix this in a subsequent production run, but those already in the channel will get a note documenting the problem.

While affected users can return their HAT, those adventurous enough to wield a steady soldering iron have a few options, according to the Foundation:

Upton also confirmed that running the fan at its highest speed setting would also increase the current slightly, although we'd suggest such an approach would be a very temporary fix.

As for warranties for modified hardware, Upton said: "It wouldn't be adventurous if it didn't void your warranty", before adding "if you went for the second option (modding the HAT not the Pi), I think we'd be inclined to honour the warranty regardless."

None of the approaches is ideal. The moral of the story, as Upton sighed, is: "Do more testing, particularly where we have multiple vendors for key bits of silicon."

Several hardware vendors could learn much from the openness of the Raspberry Pi Foundation's admission, if not so much from its validation practices. ®