Nvidia promises to shift graphics grunt work to the cloud, for a price 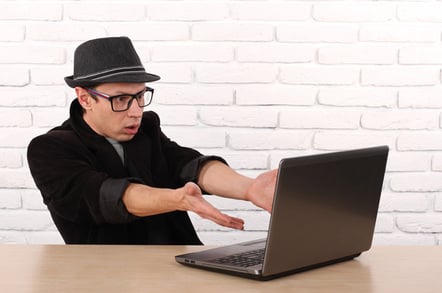 It's a fact of life for gamers: If you want to be able to compete, you need the best hardware to give you an edge.

That means putting down at least $2,000 to make sure you have a machine with the right processor, motherboard, graphics card and memory - not to mention the best keyboard, mouse and the all-important gaming chair. And all that's just to give you a fighting chance.

Well things may be changing, according to graphics processor supreme Nvidia. With the next-generation 5G mobile networks and new cloud gaming services that do much of the graphics processing for you, your crappy $200 laptop will be in a position to rival even the highest-end gaming desktops.

Nvidia VP of sales, Paul Bommarito was at the AT&T Spark conference in San Francisco to demonstrate what it can do with 5G – and gave a demo on stage showing that "you don't need a big expensive high-end workstation" to keep pace with the best.

The laptop is question wasn't exactly a $200 model – we took a look after the session – but it is far from a big workstation under a desk. It's a moveable machine that gives you 60 frames-per-second at HD resolution with a remarkable 16ms lag. Nvidia recommends less than 60ms for an "optimal experience."

As anyone who has played Fortnite (or any online game) can confess, the resolution, the speed and, oh yes, the latency will make all the difference. That fraction-of-a-second delay will kill you – literally – every time.

So how is this possible?

It's a combination of two things: Nvidia's GeForce Now cloud gaming service that does most of the graphics grunt work for you and so removes the need for monster processing powers on your machine, and 5G super-fast wireless technology that provides the bandwidth and low latency.

The situation at the conference was optimal, Nvidia admitted – there was, after all, an entire 5G base station set up in the main demo area – but its rep pointed out there was no dedicated internet line or special setup. You should – if and when you are able to get 5G – be able to experience the same thing.

And the company is even confident that in future it will be able to get that latency down to a blazing 3ms – which opens up the possibility of streaming virtual reality games, and so may allow people to dump the bulky and expensive setups of current high-end VR headsets.

The GeForce Now service has been around in its current form for about a year but it is still in beta. It's only available in the US and Europe and there is a long waitlist; the fact that it is currently free helps.

Nvidia won't be drawn on the cost of the service when it comes out of beta but that it will be "reasonable." The company hopes it will become a regular subscription like Netflix or HBO, but for gaming. What that says to us is $10 a month – but the company may be struggling to get the price down to that level, which would explain why it's still in beta a year later.

But 5G may be the answer. And 5G and gamers could well be the answer to a much bigger question facing the telco industry: Who's actually going to pay for faster, lower latency mobile speeds?

As much as consumers love speed, they love not paying money more. Even though AT&T announced today that it is really getting ready for 5G and has, literally this weekend, carried out the first real-world 5G call, the truth is that no one is sure how to cover the additional cost of providing it.

Will people pay an extra $10 a month just so a YouTube video starts a little faster and breaks up a little less? At the moment, it's highly debatable. But who will pay for that extra speed is gamers. Especially if Nvidia can come good on its plan to turn your crappy laptop into a gaming monster.

Hip with the kids

This reality has also hit home at AT&T. No one at the conference seemed to play online games: A situation reflected by the fact that the company put together an entire video explaining to people what e-sports are, and why they are actually quite a big deal.

"More than 100,000 people attend a recent e-sports event," the voiceover promised over images of e-sports stars with graphics showing that they had made millions of dollars in earnings. The general mood was then reflected by AT&T CTO Andre Fuetsch who came back on stage and noted: "Regardless of your opinion, you can't ignore serious business."

In other words: this is where the money is folks. Lots of conversations about kids – and grandkids – followed.

How much of a barrier is good gaming hardware to aspiring e-sports stars? It's hard to know when so much of it is also dependent on player skill and reaction times. But it's safe to say that without a good gaming machine no one does well; and no one who does well doesn't play on a good machine.

But within just a year - with a $10-a-month cloud gaming subscription and an extra $10 a month to get 5G speeds - you could find your cheap machine can hold its own with the desktop monsters. That spells trouble for hardware sellers, who have made a pretty penny selling top-end kit to gamers.

As for everyone over 30 tempted to roll their eyes and the whole idea of e-sports: don't knock it. Thanks to them being willing to pay more to fund 5G expansion, you'll be able to get higher speeds on your device sooner and for less.