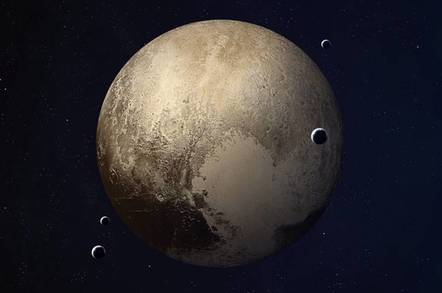 A bunch of physicists are still fired up over the International Astronomical Union’s (IAU) decision to demote Pluto from being a fully fledged planet to a mere dwarf world in 2006.

Pluto hovers on the edge of our Solar System, mixing it up with bits of icy debris in the Kuiper Belt. For that reason, IAU officials decided that Pluto couldn’t be considered a normal planet. It simply isn’t massive enough to have enough gravitational impact to clear its orbit.

"It's a sloppy definition," said Philip Metzger, a planetary physicist at the University of Florida in the US, on Thursday. "They didn't say what they meant by clearing their orbit. If you take that literally, then there are no planets, because no planet clears its orbit."

Metzger and his colleagues have studied how the classification of asteroids has changed over time from 1801 to present time, and published their findings in a paper in the journal Icarus. Up until the 1950s even some asteroids – which share orbits and definitely haven’t cleared their paths – were deemed planets.

"We now have a list of well over 100 recent examples of planetary scientists using the word planet in a way that violates the IAU definition, but they are doing it because it's functionally useful," Metzger said.

"The IAU definition would say that the fundamental object of planetary science, the planet, is supposed to be a defined on the basis of a concept that nobody uses in their research. And it would leave out the second-most complex, interesting planet in our solar system."

Scientists stopped referring to asteroids as planets after about 1957, according to the paper. “The geophysical nature of asteroids showing them to be geophysically different than the large planets," it reads. "This is when the terminology in asteroid publications calling them planets abruptly plunged from a high level of usage where it had hovered during the period 1801 – 1957 to a low level that held constant thereafter.”

Metzger believes objects should be characterized by their inherent properties rather than something less permanent, such as if an object has cleared its neighborhood or not.

“Dynamics are not constant, they are constantly changing," he said. "So, they are not the fundamental description of a body, they are just the occupation of a body at a current era."

Instead, he prefers IAU’s condition that a planet is true planet if is sufficiently large enough that gravity has molded it into a spherical shape. By that definition, Pluto is a planet. "That's not just an arbitrary definition," he added. "It turns out this is an important milestone in the evolution of a planetary body, because apparently when it happens, it initiates active geology in the body."

Pluto is arguably more complex than other planets. Evidence has hinted that it holds a hidden ocean beneath its surface and we know it has an atmosphere containing organic compounds and five moons.

"It's more dynamic and alive than Mars," Metzger said. "The only planet that has more complex geology is the Earth." ®

NASA boffins on Pluto: We see skies of BLUE and... RED water ice