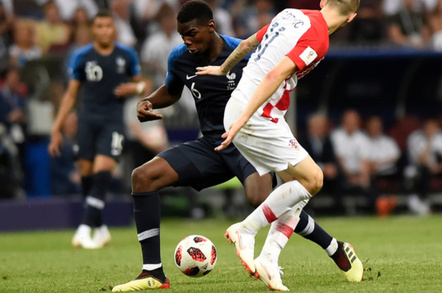 Paul Pogba with a ball during the World Cup 2018 final match France vs Croatia. Pic: A. Ricardo / Shutterstock.com

Data-breach-hit Dixons Carphone is on track to meet its profit expectations for the current fiscal year as the World Cup beefed up sales of TVs to more than offset crappier demand for computing kit and white box goods.

The group said like-for-like sales were flat for the 13 weeks ended 28 July, the firm’s first quarter of fiscal ’19, it said in a trading update this morning.

In the UK, Dix Car’s largest territory, turnover was unchanged on the same period a year ago: electrical goods came in even Stephen, and there was growth in consumer electronics due to the football tournament “against softer white goods and computing markets”.

Mobile sales fell 1 per cent on a like-for-like basis as many consumers continue to shun smartphone upgrades because what they already own does the job. There was a reduction in postpay “as anticipated” but share gains in SIM-only and SIM-free shipments.

The Nordics retail market shrank but Dixons Carphone said its sales remained flat so it took business from rivals. The retailer’s Greek ops jumped 9 per cent, outpacing the local market as a whole.

Full year profit before tax guidance hovered at the £300m mark and all other forecasts for the year remain unchanged. In fiscal ’18, the company generated income before tax of £382m.

The bottom line slide can be in part attributed to weaker sales of phones with the group closing 92 Carphone Warehouse stores. Group chief exec Alex Baldock said in May he has “plenty to fix” at the firm. Sluggish electrical sales haven’t helped his cause either.

There was no mention in today’s update of the embarrassing data breach Dix Car confessed to in June: a cyber break-in that actually exposed the privates of 1.2 million customer records excluding payment information.

Baldock said in a statement today:

“We’ve made good progress in setting a clear long-term direction for the business, one that sharpens our focus on the core, and that better joins up both our offer to customers and our business behind the scenes.”

He plans to provide a “fuller update on our plans and progress” in December at the half-way stage of the financial year. ®