Who knew what on warrantless state snooping? 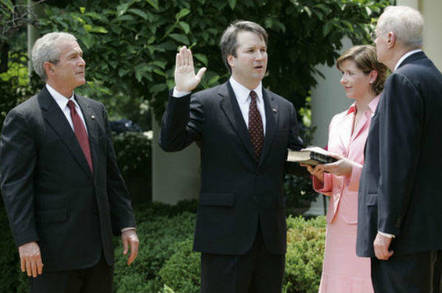 Analysis Despite repeated denials, some under oath, US Supreme Court nominee Brett Kavanaugh appears to have known – and may even have pushed for – the warrantless spying program that was approved by President George W Bush in the aftermath of the September 11, 2001 attacks.

That is the upshot of a series of emails that were provided to US Congress as it carried out its review of Judge Kavanaugh's legal record during what have become highly contentious confirmation hearings for his proposed lifetime appointment to the highest court in the US.

The emails are labeled "committee confidential" meaning that they should not be shared beyond the committee. But on Thursday they were leaked to the news media and some were then later publicly posted by Senator Cory Booker (D-NJ), who argued they were of such significance that their release was warranted due to the broader public interest.

One email from Kavanaugh, who was working at the White House at the time, to John Yoo at the Justice Department in September 2001, appears to directly contradict Kavanaugh's claims (made under oath) not to have heard about the warrantless surveillance program known as Stellar Wind until it was exposed in an article in 2005.

Yoo was to become the main architect of the surveillance program that was later deemed illegal and unconstitutional, just as he was to author an infamous memo that was used to justify torture programs approved by the Bush Administration.

Kavanaugh titled his email sent to Yoo "4A issue" – referring the Fourth Amendment covering unreasonable search – and asked Yoo: "Any results yet on the 4A implications of random/constant surveillance of phone and e-mail conversations of non-citizens who are in the United States when the purpose of the surveillance is to prevent terrorist/criminal violence?" Carbon-copied on the emails was Timothy Flanagan, the then deputy White House counsel.

That would appear to indicate a clear understanding of the fact that Yoo had been asked to draw up a series of legal justifications for programs that President Bush and Vice President Dick Cheney wanted to introduce in the aftermath of the terrorist attacks.

One of them – which Kavanaugh was referring to – was titled "Constitutional Standards on Random Electronic Surveillance for Counter-Terrorism Purposes" and considered a "hypothetical" warrantless surveillance program.

Kavanaugh's email was sent on September 17 and on October 4, Yoo's memo was finalized. The Stellar Wind spying program was authorized later that same day by President Bush.

But when asked about his knowledge of any spying programs back in 2006 when he had a confirmation hearing to get on the Washington DC appeals court, Kavanaugh told Senator Patrick Leahy (D-VT) several times that he had not seen or heard anything about the warrantless surveillance program before it was revealed in the press.

This week, with the "confidential" email in hand, Leahy asked Kavanaugh again about his knowledge of warrantless surveillance programs and whether he stood by his claim not to have been involved.

Kavanaugh dodged the question by using the same technique that President Bush himself had used when asked about the program years earlier – referring to one small part of the program and then pretending that was the only aspect under consideration.

It's worth noting that Kavanaugh has formally prepared numerous nominees for the congressional confirmation process and so is expert at the various question-dodging techniques employed at such hearings.

Leahy pushed back but ultimately was withheld from going into further detail because of the confidential nature of the memo that he was referring to – a memo that is now in the public domain.

Meanwhile, John Yoo – who is currently a law professor in California – told the New York Times in an email before the memo was published that: "Kavanaugh was not cleared to know about Stellar Wind or any other counterterrorism surveillance program that I worked on while at the Justice Department. I have never had any conversation with Kavanaugh about those programs, or even the general subject of presidential power and electronic surveillance. Ever."

All of which comes down the usual splitting of hairs and carefully worded denials that to the rest of the world look like outright lies.

It is of course entirely possible that Kavanaugh was not formally included in any subsequent discussion of the warrantless surveillance program. His email was sent one week after the September 11 attacks at 3am in the morning and he cc'ed the deputy White House counsel, so it is very possible in the whirlwind of those days he was asked to follow up on something while not being formally part of the group that put the spying program together.

It is also perfectly possible that Kavanaugh's involvement in the program came before the program was named "Stellar Wind" and that he did not form part of the team that implemented it.

That would allow everyone to claim he had no knowledge of it – if you define "knowledge" as being formally included in discussions or having their legal opinion sought. And to those in the Executive Branch this could easily be seen as a justifiable bending of the truth since all kinds of issues are discussed all the time at the top level of government but only when someone's official opinion is sought does it have any real bearing of the issue itself.

Or, in other words, you can't hold someone responsible for something when they were not given official input into its evolution.

But while that distinction is justifiable when considering political positions, it is an entirely different situation when you are considering a lifetime position on the country's highest court.

In fact, the most baffling thing about the whole Kavanaugh nomination is why the White House even considered putting forward someone who spent years within the White House, especially during some of its most eventful times.

It is a shameful sign of just how blinkedly partisan American politics have become that the White House chose to elevate a highly politicized figure to a Supreme Court Justice position rather than choose someone who has spent their career within the traditional legal system.

Some feel the answer is that Kavanaugh is pretty much the only eligible lawyer that has given a clear view of the extent of presidential powers, and it's an expansive one. That would be something that President Trump would be excited about given what looks like the increasing possibility that he will be impeached.

In a telling exchange this week between Kavanaugh and Senator Kamala Harris (D-CA), he stumbled repeatedly when asked directly whether he had had a conversation with the president's lawyers over the investigation being carried out by special investigator Robert Mueller.

Of course, the spying memo is not the only controversial one covering Kavanaugh. There are also extremely problematic emails covering hot button topics like abortion, racial profiling, the theft of Congressional documents, and so on.

And just in case you were wondering, Kavanaugh hasn't changed his views on mass surveillance in the intervening years. As we pointed out in July, he is firmly pro-NSA and has even written a defense of its programs.

"The government's metadata collection program is entirely consistent with the Fourth Amendment," he wrote, adding that: "Critical national security need outweighs the impact on privacy."

That opinion was specifically added to a denial [PDF] by the Washington DC Court of Appeals in 2015 to rehear a case in front of the full court. ®