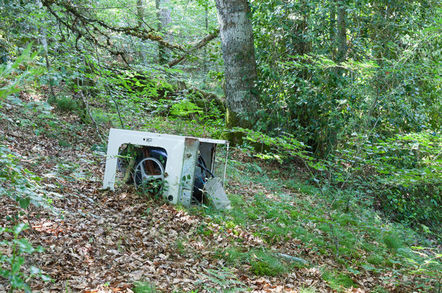 What kind of animal does this?

A local politician has launched his own chatbot, in what El Reg can only imagine is a bid to one-up health secretary Matt Hancock.

Software developer Mike Rouse, who was elected to Redditch Borough Council in May by the skin of his teeth, winning by just one vote, is aiming to clean up the streets using his bot.

Or, more accurately, the bot will triage questions from residents... and one of the most common issues is missed bin collections.

The chatbot, which works via Facebook Messenger, will also address the scourge of local authorities across the UK – fly-tipping.

As El Reg has reported at great (and possibly questionable) length, boats are a particular problem, even in landlocked regions.

The automated responses will also hand out info on contact details, road closures and deal with requests for tree cutting.

And, in common with the most famous political tech spinoff of the year, the Matt Hancock app, Rouse's chatbot will also allow constituents to rate the West Midlands council's performance and raise issues about local services.

However, Rouse's decision to use Facebook, rather than setting up his own app, as the MP for West Suffolk did, is perhaps a canny move, given the privacy concerns the Matt Hancock app raised when it launched.

Rouse has worked in the IT industry on and off since 2006 – positions have included Midlands firms SCC and GKN – with the occasional foray into politics.

He is also the man responsible for unleashing David Cameron on Facebook in 2007, having set up the former PM's official page on the platform – but is probably not expecting his chatbot to have such a large reach.

Other councils have also dipped their toes in the chatbot waters recently. Waltham Forest Council set up a Twitter chatbot in June to allow locals to report fly-tipping, dog poo and fly posting. ®

OpenWorld 2017 Big Red has all this year's big buzzwords covered

Chatbots: A load of hype or fancy lifehack for the lazy IT person?

Some of these buggers are adept at handling the mundane

'The limitations of automation'