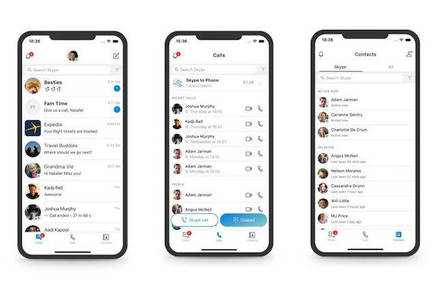 This time, Microsoft says, it really will be different: Redmond has promised to stop ruining Skype.

Users who have stuck with the product through the frustrations may or may harbour scepticism, but Skype and Outlook design director Peter Skillman blogged a mea culpa of sorts on Friday.

The Highlights feature, a misguided and widely ignored attempt to imitate Snapchat, is being sealed in a drum and pushed off the boat to join Skype Classic on the seabed.

What went wrong? As with so much software, Skype's feature-bloat made it hard to make calls, which is its main point.

Skillman gives things a more diplomatic spin: “maintaining simplicity while enhancing functionality is critical to usability,” he wrote. “This past year we explored some design changes and heard from customers that we overcomplicated some of our core scenarios. Calling became harder to execute and Highlights didn’t resonate with a majority of users.”

So the once-beloved IP call-and-text product is getting another, hopefully successful, makeover.

“Redundant and underused features that create clutter” will be deep-sixed, and mobile users will see just three buttons at the bottom of the screen – chats, calls, and contacts – because Redmond's realised that those three functions represent “all the functionality Skype customers want”.

Desktop users will see those three buttons and a fourth for notifications at top left of their screen, which Skillman says shows Microsoft is “connecting to the Skype legacy” and is “easy for long-time Skype users to understand”.

Contacts has also been reworked, as has the UI (including a simplified “Classic” blue theme), with pointless decorative elements (“notifications with a squiggle shape cut out”) reduced.

This, Skillman's post said, “brings your content to the forefront” (we thought calls-texts-contacts were the core elements … hmmm).

The changes land in Skype version (8.29) for Android, iOS, macOS, Linux, and Windows 7 to 8.1 operating systems; and you can retrieve old Highlights until September 30. ®