Google is 20, Chrome is 10, and Microsoft would rather ignore the Nokia deal's 5th birthday 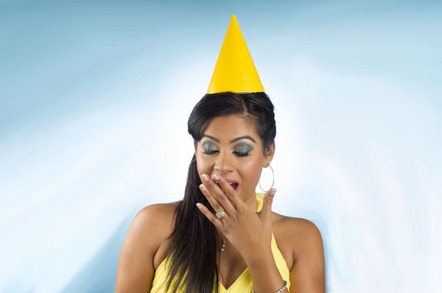 It is 20 years ago today that ad-slinger Google filed for incorporation and the behemoth that we all know and - some - love came into being via a jerry-rigged rack of servers in a Menlo Park garage.

Stanford students Larry Page and Sergey Brin had already collaborated on a search engine called BackRub (named for the PageRank algorithm that ranked a website by how many pages linked back to it – geddit?) before renaming the thing "Google" as a play on the mathematical term Googol (a 1 followed by 100 zeroes).

At a time when web searching was dominated by the likes of Yahoo!, Excite and Alta Vista, the refreshingly uncluttered Google front page, along with a perceived higher degree of accuracy over its peers, helped the popularity of the site soar.

Brin and Page tried to cash out of their baby shortly after incorporation and offered to sell up to Excite for the princely sum of $1m in 1999. Excite passed on the opportunity and instead watched Google go for IPO in 2004, making $1.67bn with a market capitalisation of $23bn. Ouch. 20 years since incorporation, that market cap is $852.17bn. Oops.

The company famously had the motto "Don't be evil" but became increasingly flexible in its definition of "evil" as it headed towards the difficult teenage years - the phrase was removed from its code of conduct this summer.

Fanboi favourite Steve Jobs blasted the motto as "bullshit" as Google rolled its Android tanks onto Apple's iOS lawn. The motto will also need more than a little stretching to accommodate Google's hopes to re-enter the Chinese market. Even the saintly British politicians have taken a look at the search giant's practices and said the parliamentary equivalent of "steady on, old chap".

While corporate bigwigs in the Chocolate Factory may skip over the ethos, its staff still seem to possess a backbone, protesting at Google's involvement in the US Department of Defense's Project Maven. Maven is a tool to analyse drone footage, which sits poorly with caring, cuddly image the company wishes to project.

Thankfully, "don't be creepy" was left off the corporate masthead as the search giant enters its third decade seeking new ways to maximise advertising revenue. Whether users like it or not.

10 years of Chrome. Perhaps time for a diet?

As Google's competitors were waking up to the dominance of the Chocolate Factory's search engine, Google took a stab at Microsoft's dominance of the desktop with a light, fast browser in the form of Chrome back in 2008.

My, how times change.

The browser's arrival was greeted with much excitement, particularly by users still making do with the lumbering beast that was Internet Explorer 8. We took a look and came away impressed by Google's offspring, particularly its HTML 5 support, which was sorely lacking in Microsoft's competing product. We also noted that it was a vehicle for delivering web applications, something that would come to pass in the form of Chrome OS a year later.

Thanks to a lack of meaningful competition from Microsoft, Chrome quickly became the dominant desktop browser in spite of a late effort from Redmond in the form of Edge and Firefox attempting to trim back some of its own bloat as the memory footprint of Google's browser continued to grow.

Indeed, what may do for Chrome is its seemingly ravenous appetite for system resources. As the browser turns 10, one may ask how Google justifies how Chrome has bloated over its formative years. With leaner and hungrier options waiting in the wings, its dominance is not assured. Just ask Microsoft.

Microsoft unlikely to be partying as Nokia deal turns 5

Unlike Google, there won't be cake at Redmond to celebrate the fifth anniversary of the acquisition of Nokia's mobile business. Unless that cake is being flung at an effigy of Steve Ballmer, of course.

Under the €5.44bn deal, Microsoft snapped up the phone and devices division of Nokia, which included the Lumia line of Windows Phones.

What happened next is the stuff of legend. While many hoped the deal would see Microsoft kickstart the flat-lining Windows Phone market, the reality turned out somewhat differently. A lack of apps ensured customers stayed away in their droves and a failure to turn out hardware left enthusiasts frustrated and disappointed.

Steve Ballmer, of course, departed Microsoft shortly after the fiasco (not helped by the initially disastrous performance of the Surface line of tablets).

Replacement CEO Satya Nadella was quick to undo Microsoft's misadventure into mobile hardware to the dismay of fans and delight of the markets. Less than three years after the acquisition, the Redmond axeman dealt with the Lumia line with his usual aplomb and third parties followed suit in 2017.

As Nadella observed: "I did not get why the world needed the third ecosystem in phones." At €5.44bn, it was an expensive lesson to learn. ®