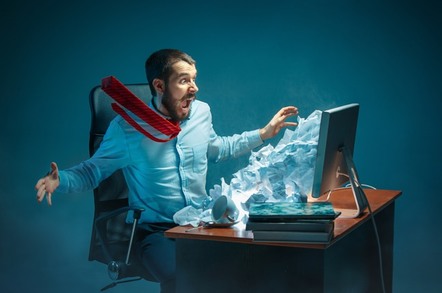 Greater control over intrusive notifications is one of the relatively few marquee features in iOS 12 – few because Apple, in an effort that has been ongoing for a while, is focusing on quality over quantity. The company touts its forthcoming mobile operating system by declaring that "notification management in iOS 12 gives you new ways to reduce interruptions throughout your day."

The previous iOS 12 beta seed, issued on Monday, has been presenting iPhone and iPad beta testers with repeated pop-up notifications that say, "A new iOS update is now available. Please update from the iOS 12 beta." These notifications reappeared with subsequent device unlocking or Notification Center dismissal. And they required manual removal every time.

The notification flood spilled over into social media, eliciting the usual chorus of complaints and jibes.

This is getting out of hand.. it's popping up every 5 mins 😭 @AppleSupport we need a fix #iOS12 pic.twitter.com/mkMu4NyA4Q

Via Twitter, Guilherme Rambo, a developer who writes for 9to5mac.com, traced the problem to the expiration time setting of the problematic iOS 12 beta build.

"It looks like this method in SpringBoard [the iOS home screen management app] does some date/time calculations to determine if the current build is about to expire, every time the cover sheet gets dismissed," he wrote. "For some reason, the latest builds of iOS 12 think they're about to expire."

The iOS 12 beta released on Friday fixes the issue.

Apple this week announced a September 12 press event in the Steve Jobs Theatre at its Cupertino, Calif., headquarters, known as Apple Park – where the glass so clear that people walk into it.

As usual, the company did not tip its hand, but it's expected to talk up its latest iPhone, iPad and Apple Watch hardware and the iOS 12 and watchOS 5 software that will run the devices. Proof-of-life, which is to say actual product, should ship shortly thereafter.