Moogsoft lays out its pitch 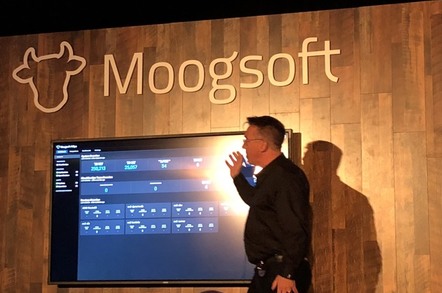 On Thursday, Moogsoft, maker of an AI platform for IT automation, invited a few corporate customers and like-thinking vendors to testify to the saving grace of AI-driven IT automation.

CEO Phil Tee opened the second annual AIOps Symposium by questioning the pursuit of data. Enterprises gather 44TB of data daily, he said, and that's set to increase forty time over the next decade. Yet very little meaningful information comes from those bits and bytes, he insisted.

For all this info, Tee said, technology outcome stats like server downtime are going in the wrong direction. "Could it be in service assurance and IT ops that more data equals less understanding?" he mused.

Spoiler: Yes, but for our machines. Tee blamed the worsening signal-to-noise ratio on increasing complexity, specifically around IT operations. Container technology like Kubernetes and Docker has a well-deserved reputation for being complicated and it's spreading.

In 2013, he said, Docker wasn't even a thing for enterprise and last year, there was a 77,000 per cent uptick in jobs listing Docker as a core competency. Also, he said IT practitioners need to know 44 per cent more programming languages than they did a decade ago.

Other players chime in

Michael Beesley, CTO of service provider networking at Cisco, showed up later in the program to make this point by citing the high growth in network data traffic. This has been a Cisco talking point for years.

How might this complexity and data overload be solved? AI of course. And by AI we mean machine learning algorithms and the application of sophisticated statistics, not some semblance of human intelligence.

Tee's commitment to the healing power of AI at times got lost amid the jargon: "We believe that this slavish creation of data lakes will not get you to the actionable instance efficiently."

That's roundabout way of insisting that gathering data doesn't make it meaningful. And it's a fair point.

Whether the products Tee was pushing – version 7.0 of Moogsoft's AIOps platform and a new bit of kit called Moogsoft Observe, slated for beta in November – can turn IT system event exhaust into comprehensible fix-it recommendations for ops folks isn't necessarily as obvious.

But it's hard to argue with the general premise, that vast volumes of IT ops data – log files, server events, and such – should be processed by machine learning algorithms rather than be pushed immediately to people.

Kevin Phillips, director of systems management engineering at Royal Bank of Canada, was invited on stage to say as much.

Philips was identified in the program as an employee of "Canada's biggest bank" and referred to himself as such, saying that he couldn't name his employer. But he suggested audience members submit a search query to find out. If only AI could save us from peevish and pointless corporate communications policies.

Jim Reed, CTO of SAP SuccessFactors, was much more straightforward - introducing himself by recounting that in 2015 he was working for IBM when an algorithm pulled his CV and he got a call saying, "We've got a dumpster fire for you."

We can rebuild him, we have the technology: AI will help security teams smack pesky anomalies

Phillips recounted the familiar fable of the legacy app and the shiny new thing. He didn't name the legacy app – see above – but he offered assurance that it fell short around 2011. Moogsoft, the shiny new thing, was brought in and, after some adjustment among workers, led to a 52 per cent reduction in trouble tickets, 50 per cent lower MTTR (mean-time to repair), and led to 10 fewer positions.

Tee then brought in Colin Fletcher, a research director at Gartner, to frame enterprise AI adoption in terms of casualties. "30 per cent of IT organizations that fail to adopt AI will not be operational viable by 2022," declared Fletcher, backed up by a projected slide asserting the same thing.

You read that right. Data overload qualifies as an extinction event. If that sounds a bit hyperbolic, try a more mundane rendition of the premise: You'll need computers and data-handling software to deal with the data from your computers. Yep, sounds about right.

To judge by the figures cited by Fletcher – 4 per cent of CIOs have actually deployed AI in their organization – there's a bloodbath coming in four years. But it may not be that bad: he said about half of CIOs are doing something with AI. And that something can be expected to become more substantial in time.

Regardless, Fletcher suggested IT groups will have to up their data science game. "Whether or not you want to do this...the rest of the organization is counting on IT to become a data science center of excellence, one way or another," he said. ®