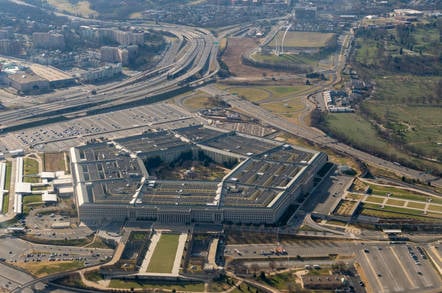 The Pentagon is no longer taking questions on its controversial cloud contract after making last-minute amendments to the deal – and has received another complaint from disgruntled prospective bidder Oracle.

The Joint Enterprise Defense Infrastructure (JEDI) contract has a massive scope, covering different levels of secrecy and classification across all branches of the US military, and a massive budget, being worth a potential $10bn for a maximum of 10 years.

Unsurprisingly, it has garnered similar levels of interest and complaint. Most criticism focused on the decision to hand the deal to a single vendor amid speculation that AWS would be a shoo-in.

Would-be bidder – and longtime AWS rival – Oracle filed an official complaint with US government at the start of the month, arguing a single vendor would lock the Department of Defense into "legacy cloud" and went against its purported commitment to innovation and competition.

It has now filed a supplementary protest with the Government Accountability Office (GAO) – a move first reported by US outlet Nextgov, and which is not yet public but is likely to be an exchange of information and documents.

The filing coincided with the Pentagon updating the terms of the JEDI deal, which it said came after engagement with industry after the previous request for proposals (RFP) was published.

It received 218 questions to that RFP, which included one about whether a request for an online commercial marketplace for third-party products and services was "intended to limit the competition to Amazon".

The government responded that many commercial cloud providers have an online marketplace and that it was an important requirement "to facilitate the rapid adoption of cloud infrastructure and the ability to operationalize that infrastructure".

Multiple others related to clarifications and refinements of the text, for instance on requirements for connectivity in Africa, data storage, purging or destroying hardware, and on pricing scenarios.

The Pentagon this week stopped taking questions on the amendments so it is expected that the final, final RFP – should there be any further changes – will not be far away.

It also published Oracle's initial protest documents, but the department added that it wasn't changing the bidding process. "All offerors are advised that DoD is proceeding with the solicitation process," it said.

According to the GAO's site, it has until 14 November to respond to the first protest case, and until 3 December for the additional filing.

However, the closing date for the JEDI contract remains 17 September. ®