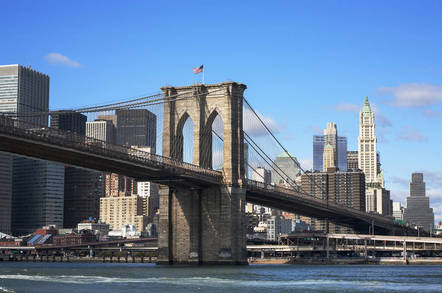 Update Mapping service Mapbox says that a breakdown in its filtering process was responsible for an incident that briefly saw the company’s map of New York City renamed to ‘Jewtropolis’ by vandals.

The mapping site issued a statement Thursday morning to address the defacement of the maps it provides to many sites and apps, including SnapChat and Zillow.

“We build systems so this does not happen,” the company said of the thing that just happened.

“Our maps are made from over 130 different sets of data, and we have a strong double validation monitoring system. Our preliminary root cause analysis shows that this act of hate speech was properly detected immediately and put into quarantine for human review.”

While Mapbox says it is working to track down the culprit, the belief is that someone made an edit to the OpenStreetMap data that MapBox uses for its street maps. Apparently that edit was then picked up by MapBox and fed to the likes of Snap and Zillow.

Chap behind Godwin's law suspends his own rule for Charlottesville fascists: 'By all means, compare them to Nazis'

That this sort of vandalism occurs on the internet regularly will shock approximately nobody. That it was able to slip through the filters and get onto multiple popular consumer and business sites, however, exposes a major weakness in the filtering process.

Mapbox says that it uses an AI validation system to flag map changes, then submits them for review. The company estimate it processes about 70,000 such edits a day. This is thought to be where the breakdown occurred; the AI flagged the offensive name change, but for some reason the human in charge of blocking it did not do so.

“We apologize to customers and users who were exposed to this disgusting attack,” Mapbox

“We will continue to investigate this act and make appropriate changes to further limit the potential for future human error.” ®

"An issue with one of our third-party map vendors resulted in an offensive term appearing on some StreetEasy maps this morning," a Zillow spokesperson told The Register.

"We are deeply sorry and addressed it as soon as we knew. The vendor is working on a fix, and in addition, we have replaced those maps on our site."